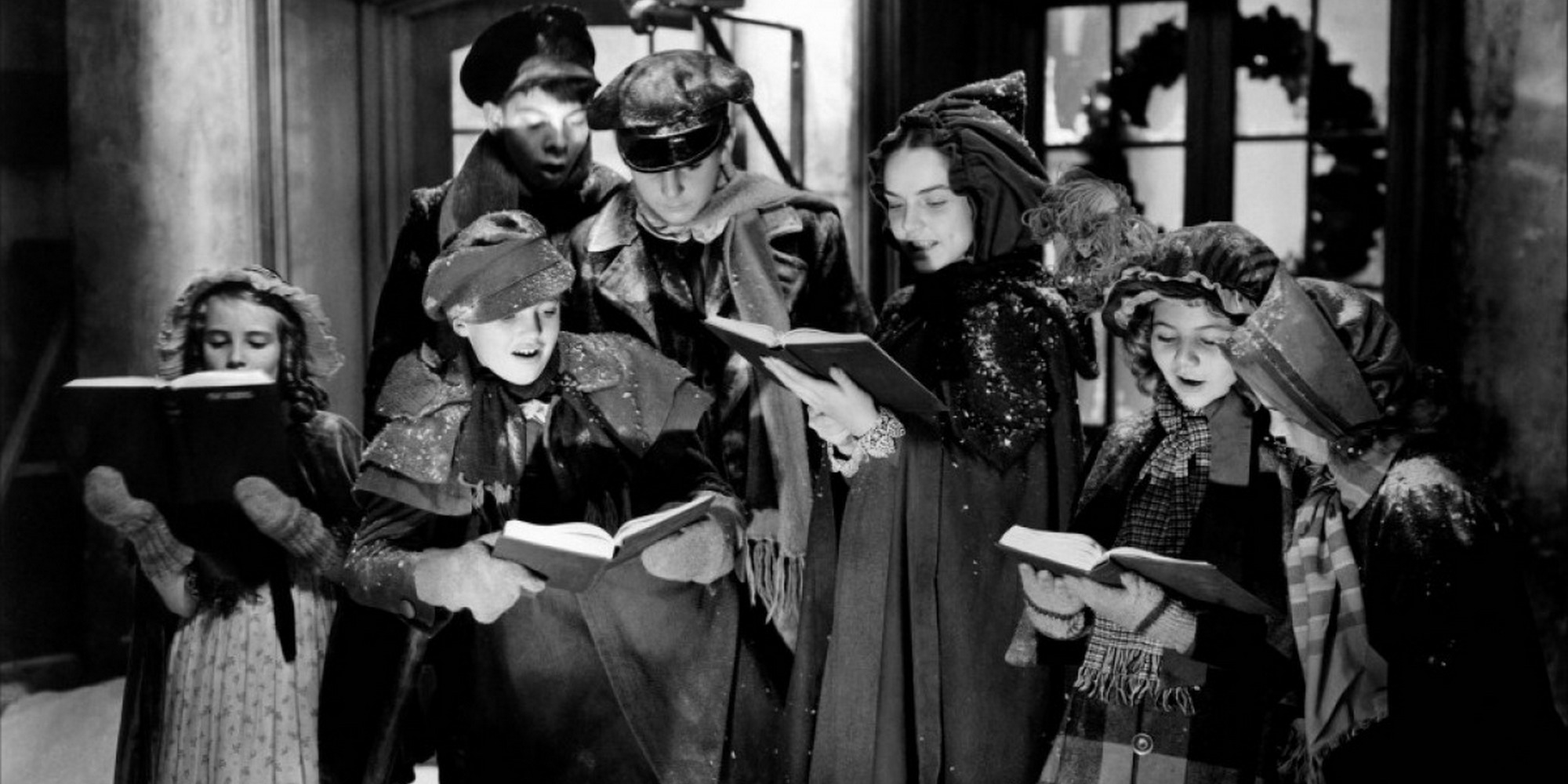 Malcolm Andrews, editor of ‘The Dickensian’, tells the story of this much-loved Christmas classic.

On a cold January evening in 1858, Charles Dickens stepped onto the stage of a large hall in Bristol. Several hundred people in the audience waited for him to begin to read A Christmas Carol to them.  Just before he started, he spoke to them and asked them to put aside formalities, even though they were gathered in a public place, and feel free to laugh and cry as they pleased. Above all, he asked them to make themselves as much as possible ‘like a group of friends, listening to a tale told by a winter fire.’

That is still the best advice to anyone reading or listening to A Christmas Carol. Ideally, it should be read in one sitting, without a break, so that the gathering pace, the sadness, the comedy, the joy – this dizzying mix of emotions as the story unfolds – should all come together as one uninterrupted experience. It was with that kind of emotional excitement that Dickens wrote the story, as he later told a friend (putting himself into the third person): ‘Charles Dickens wept and laughed and wept again, and excited himself in the most extraordinary manner in the composition; and thinking whereof he walked about the black streets of London, fifteen and twenty miles many a night when all the sober folks had gone to bed.’

If you find yourself laughing and crying when reading the Carol, you will be in good company! Another famous writer of the period, Robert Louis Stevenson, author of Treasure Island and Dr Jekyll and Mr Hyde, read the Carol and some other Christmas stories by Dickens, and seems to have been overwhelmed:

I wonder if you have ever read Dickens’s Christmas Books? …I have only read two yet, but I cried my eyes out…dear God, they are good – and I feel good after them – I shall do good and lose no time – I want to go out and comfort someone – I shall give money. Oh, what a jolly thing it is for a man to have written books like these and just filled people’s hearts with pity.

It was not only laughter and tears that the Carol drew from its readers, it also excited a strong charitable impulse. Dickens toured America in 1867-68 and gave readings of the Carol to thousands. At one such reading the head of a large factory in Vermont, Mr Fairbanks, felt very deeply moved by Carol’s message of sympathy for the poor as old Scrooge goes through his change of heart.  Fairbanks brooded for some time after he and his wife got home from the reading. His wife asked what the matter was. He told her he had decided to ‘break the custom we have hitherto observed of opening the works on Christmas Day.’ Not only did he give all his workers their first Christmas holiday as a result of Dickens’s story, but he also gave each and every factory hand the gift of a turkey.

It is no wonder that one of Dickens’s friends and a great critic of the age, Lord Francis Jeffrey, wrote to Dickens, thanking him for his book, and telling him, ‘you have done more good by this little publication, fostered more kindly feelings, and prompted more positive acts of beneficence, than can be traced to all the pulpits and confessionals in Christendom.’

The Carol became a kind of secular Bible for the Victorians – just as Dickens must have hoped.  Its background is a curious one. In early 1843 Dickens told friends he intended to publish a political pamphlet to protest against the neglect of the poor in Victorian England, and particularly children in poverty – ‘An Appeal on behalf of the Poor Man’s Child’. That pamphlet was never written. Dickens changed his mind about how best to campaign for this cause. In the autumn of that year he began to compose A Christmas Carol, and at the heart of that story is the plight of the poor crippled child Tiny Tim. Dickens knew that the way to stir the nation’s conscience was through its heart rather than its head. Scrooge at the start of the story is one of those who feel that since they pay a few taxes they need have no further involvement with the thousands of poor people. They are a ‘surplus population’ as far as Scrooge is concerned, and the workhouses or the prisons are the right places for those who can’t support themselves. By the end of the story, and after the powerful agency of the Ghosts who visit him, Scrooge is a converted man. Like Mr Fairbanks, he gives his poor clerk paid leave, and gifts the largest turkey ever seen to the clerk’s son, Tiny Tim, to whom he becomes ‘a second father’.   Scrooge in effect rejoins the human family and recovers human sympathies. It is a parable of Victorian England’s relation to its poor and their dependents.

The Carol has been a best-seller ever since its original publication at Christmas 1843.  It has been adapted for stage and screen many, many times. But one problem with most of these adaptations is that they show the story without the storyteller. If you read the original story you will, right from the start, meet the storyteller, a jolly, teasing, and very obtrusive presence in the story. He is part of the story. His voice – playful, angry, sympathetic, ecstatically joyful – is loud and clear throughout. When the first of the Ghosts arrives and stands by Scrooge’s bed, the narrator tells us that Scrooge ‘found himself face to face with the unearthly visitor…as close to it as I am now to you, and I am standing in the spirit at your elbow.’

You won’t get closer to Dickens than here in this story, as he conducts you through the dream-like journey of a changing heart. So as you open this little book, just let Dickens take over and, as he asked, imagine yourself as one of ‘a group of friends, listening to a tale told by a winter fire.’

Malcolm Andrews is the editor of ‘The Dickensian’, the journal of the Dickens Fellowship. He is also an Emeritus Professor of Victorian and Visual Studies at the University of Kent in Canterbury.