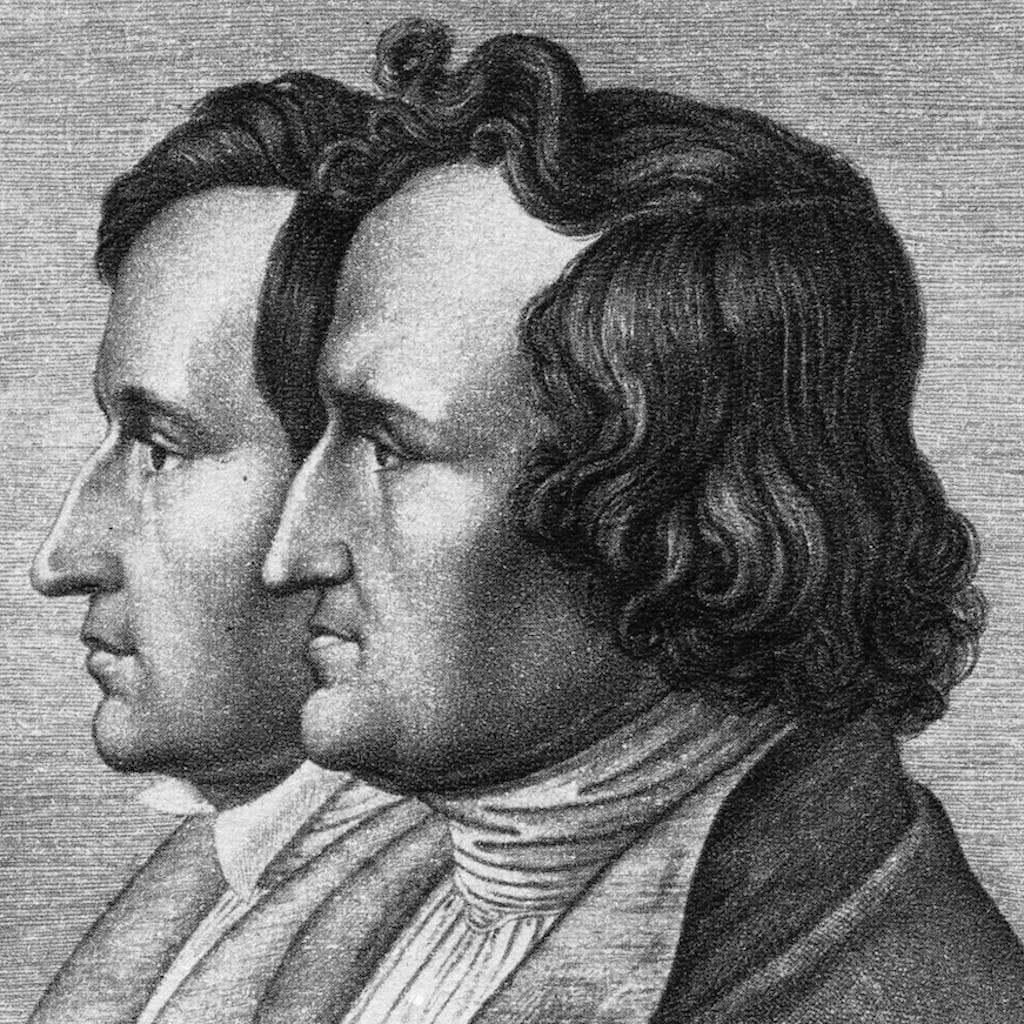 In the olden days, when wishing still worked,
there lived a king whose daughters were all beautiful,

Jacob Grimm (4th January 1785 – 20th September 1863) and Wilhelm Grimm (24th February 1786 – 16th December 1859) are well known for their publication of folklore as the popular Grimm’s Fairy Tales, but there is much more to them. The brothers were born in Hanau Germany, and were among nine children, six of whom survived infancy. They grew up in the countryside while their father Philipp Wilhelm Grimm was employed by the Prince of Hessen between 1790 and 1796. However, events took the brothers down a different path when their father died in 1796 and the family had to move into a cramped urban residence. Further strain was put on their mother, Dorothea Grimm, when their grandfather died in 1798 leaving her struggling to support the children alone.

The brothers studied at the Friedrichs-Gymnasium in Kassel, which boasts other notable alumni such as Wilhelm II, German Kaiser during WW1. After their education in Kassel was completed, they both went to the University of Marburg and studied law, Jacob in 1802 and Wilhelm in 1803. Here, they discovered other interests inspired by their professors. One of their interests that had been sparked at University was folklore, and they began to collect and research stories and legends. This continued beyond their time at university, and led to them publishing a manuscript in 1810 of several dozen tales, and their first volume Children’s and Household Tales, published in 1812. This was a collection of 86 German fairy tales. A second volume of 70 tales was published in 1814, and together they make up the first edition. The brothers played very different roles in the writing of the book; Jacob was the more intellectual and he carried out most of the research while Wilhelm turned the stories that had been collected into a form that would appeal to children. They also published 2 volumes of German Legends between 1816 and 1818, and a second edition of the Children’s and Household Tales in 1819-22 which consisted of 170 tales.

Another interest the brothers had developed at University was linguistics, particularly historical linguistics. As with their study of folklore, they continued to study linguistics after university, and by the time they were in their thirties Jacob had begun to specialise in older languages and their relationship to German. Jacob developed a theory known as ‘Grimm’s Law’, which detailed how the sounds in words change over time, and was based on vast amounts of data.

Wilhelm married Henriette Dorothea Wild in 1825, but Jacob never married. He spent most of his life living with his brother, and in 1830 they moved from Kassel to Gottingen to become professors at the university. Jacob became the librarian and Professor of German Classical Studies, and published his first volume of German Mythology in 1832. They were fired from these posts in 1837, after joining with five other professors in protest at alterations to the constitution of the Kingdom of Hanover by King Ernest Augustus, and for refusing to swear an oath to the King. The brothers returned to Kassel as this was beyond the control of Augustus. In the same year Wilhelm alone published the third edition of the Children’s and Household Tales, and in 1838 the brothers began work on the German dictionary which they went on to publish in 1854. It was an extensive undertaking and is, for German, what the Oxford English Dictionary is for English. It was not fully finished until 1961, long after the brothers’ death. The Grimm brothers received many offers of new positions, and finally accepted appointments at the University of Berlin.

By 1857 the seventh edition of the Children’s and Household Tales had been published. The changes over the years were based on reviews stating that some of the tales were not suitable for children, and that the tales were not sufficiently German. Other amendments included changing wicked mothers to wicked step-mothers, removing any sexual references and increasing violence when punishing the villains. The books were intended as serious works of folklore, and although the brothers were not the first to publish collections of tales, they were the first to publish a book which had been written from a formal, academic study of folklore.

Many of the Grimm’s fairy tales have been revived in the 20th century, most notably by Walt Disney Animation Studios. ‘Snow White’, ‘Cinderella’ and ‘Sleeping Beauty’ were some of Grimm’s best known stories which have been adapted for film, and in 1962 The Wonderful World of The Brothers Grimm was released. The film is a fictionalised version of the brothers’ lives, and went on to win an Oscar for costume design in 1963. Another fictional film, The Brothers Grimm, was released in 2005. This was a fantasy comedy starring Matt Damon and Heath Ledger as the brothers. Various other TV and film productions have been produced over the last 50 years ranging from cartoons to crime dramas which have been based on the Brothers Grimm or the tales which they had collected and put together.

Throughout their lives the Grimm brothers were complete contrasts, although they worked together to publish many tales still well known today. They spent many years researching folklore and collecting tales from peasants, and then adapted these into a form that would appeal to the masses. The brothers were more than publishers of children’s books, they were academics, linguists and cultural researchers. Their contribution to German literacy earned them a place on the 1000 Deutsche Mark note, the German currency before the Euro. Both brothers died in Berlin, but live on through their stories of princes, princesses, witches, giants and dwarfs. Even though their undertaking was designed as a serious study of folklore, they have been adapted in a way that not only folklorists will enjoy but anyone who wants to be transported to a magical world where anything is possible.

Additional resources about The Brothers Grimm:

Books by The Brothers Grimm 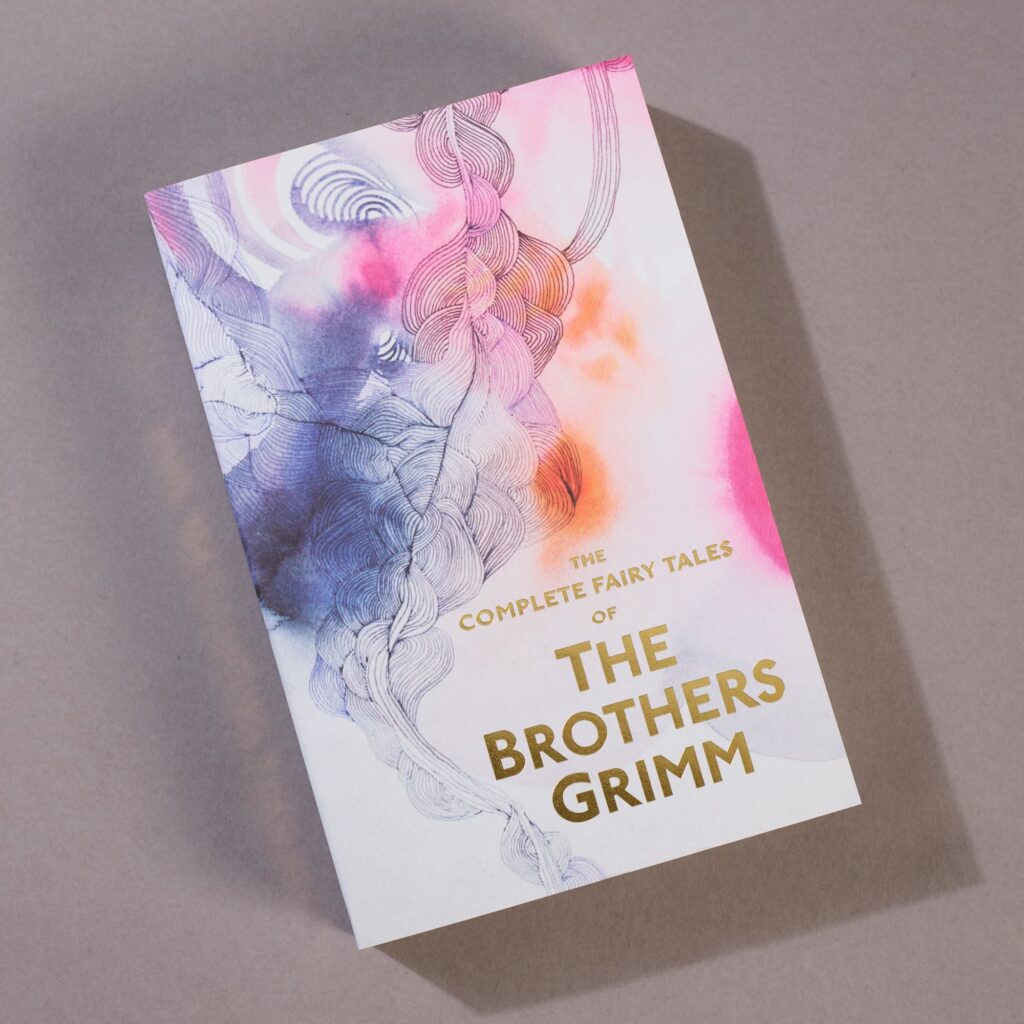