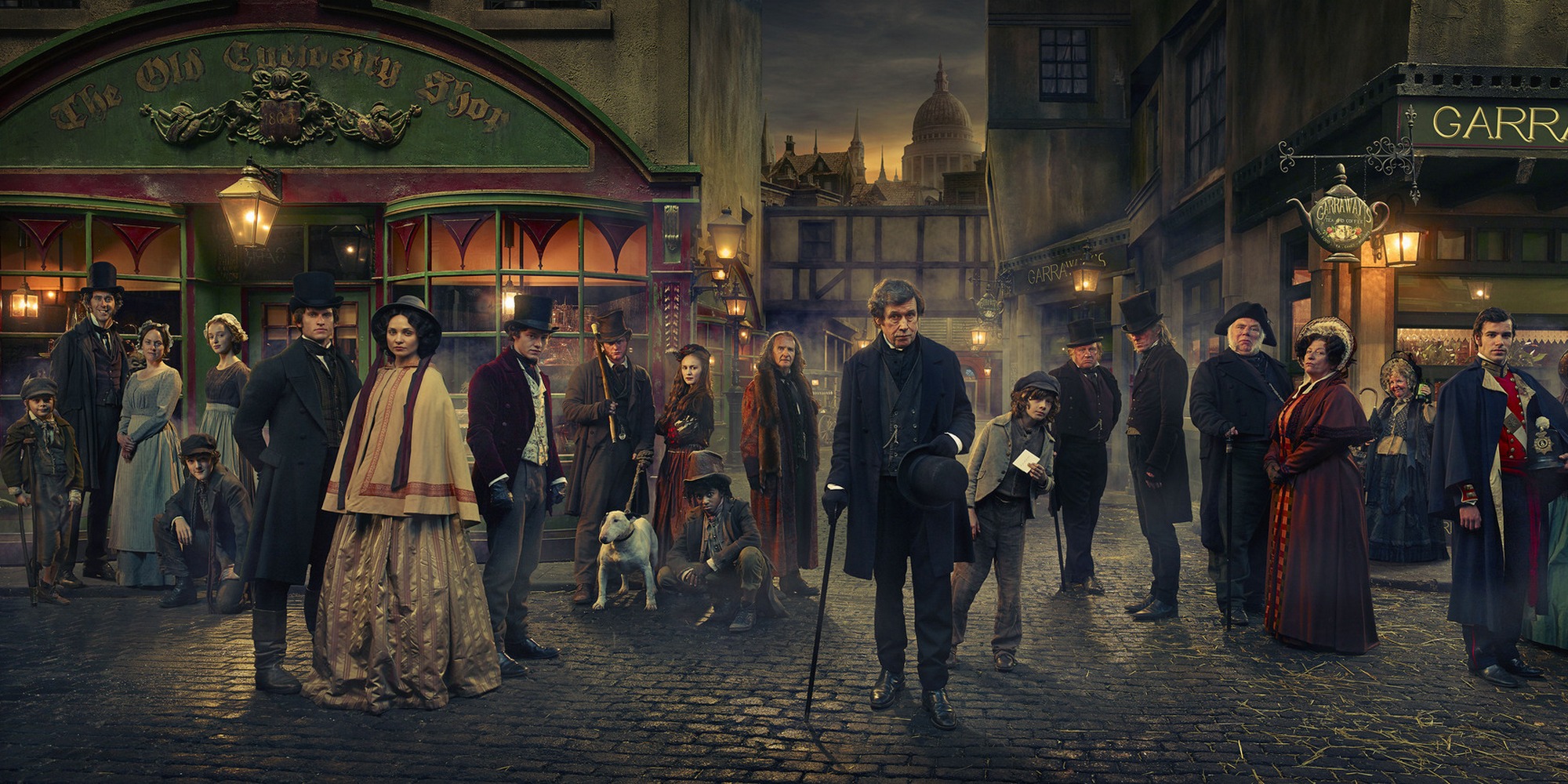 Dickensian – We review the BBC’s series so far

Sally Minogue reflects on the television series so far.

It’s not often that we encounter a genuinely new cultural idea, especially in the world of television where copycat pitches seem to have the best chance of success (think Bake Off morphing into the ludicrous Great Pottery Throwdown). So we should welcome Tony Jordan’s audacity in taking that one-time bastion of the BBC schedules, the Dickens adaptation, turning it upside down and shaking it all about in a wilfully mischievous way – even, perhaps, in a Dickensian way. There are three other writers on this 20-part series, but Jordan is the presiding genius, and much has been made of his EastEnders credentials to hang the series on the easy hook of period soap opera. Jordan rejects the comparison, noting that what defines a soap is the way it reflects our contemporary lives. (www.bbc.co.uk/news/entertainment-arts, 24 Dec 2015) He’d rather we saw this work as a way into the expansive world of Dickens’ writerly mind, where his characters first came to life and where different options for their development and narratives must originally have been considered: ‘I’m not in the world of the novel, I’m in the world of his imagination, everything is freed’. (www.telegraph.co.uk, 9 Dec 2015) So no point endlessly twittering on about inaccuracies: there’s no such thing in this concept.

Dickensian has settled down now from the confusing flurry of Christmas showings into a more orderly if eccentric scheduling: half-hour episodes on two consecutive nights each week. So how is it doing? Watching the establishing episodes was a bit like – well, like starting on a Dickens novel. Names and identifying characteristics and mannerisms of speech quickly helped to fix characters in our minds. This was aided by some proper acting. Bethany Muir gave us a believably young, still rescuable Nancy; Anton Lesser’s Fagin was the more menacing for being ostensibly affable. Bob and Emily Cratchit (Robert Wilfort and Jennifer Hennessy) were brought powerfully to the fore of the action. And Pauline Collins played Mrs Gamp for all she was worth; ok, she hammed it up, but that’s exactly what Dickens did with Mrs Gamp. Those with a passing knowledge of the novels (or their adaptations – Jordan admits to mostly watching adaptations) had some fun matching characters to titles. Picking up the narrative threads must have been more difficult, and less enjoyable, for a complete newcomer – though my 10-year-old great niece and her 6-year-old twin sisters watched the first episode with apparent absorption on Boxing Day. But then Dickens’ interest in and inwardness with children was amply represented, as was his concern with the social and moral pressures on children’s lives. Nonetheless, this was family viewing, with a somewhat sanitised back street London, in spite of Fagin, Nancy and a scary Bill Sikes walking the same streets as the assured, elegant young woman who turned out to be – gasp – Miss Havisham.

Now that we’re heading for the halfway mark (Episodes 8 and 9 this week), there is a more conventional solidity to the narrative. While the boast is that 30 Dickens characters are drawn on and inter-related, the episodes so far rely heavily on back stories from or invented connections between a relatively few novels: Great Expectations, Bleak House, Oliver Twist, and A Christmas Carol. The other novels name-checked (The Old Curiosity Shop, Our Mutual Friend) scarcely contribute to the narrative; rather, key characters or interiors are filched from them. There are two further unifying strategies. One is to make London the only setting, and thus a character in itself; this is apt, even though it means losing atmospheric locations outside London, such as that of the original Satis House. The other is to use the lugubrious Inspector Bucket (Stephen Rea being Stephen Rea) to conduct his own murder mystery genre within the period drama. Perhaps the hope was that this would keep viewers turning on. Ratings for the initial double episodes rewarded the high marketing profile given to the series: 5 million for the first episode, 4.3 million for the second, and in the top ten most watched programmes for Boxing Day. Dickensian thus squared up respectably to ITV’s Downton which attracted 6.6 million on Christmas Day. (www.theguardian.com/media, 27 Dec 2015) Dickens would have liked those stats! Indeed, Downton is more his style than EastEnders, if he’d been writing for television today. Time will tell whether these ratings sustain sufficiently to justify the BBC’s £500,000 per episode (gasp again). Meanwhile, if the series tempts any viewer to read a Dickens novel for the first time, s/he will be sorely confused to find half the characters mislaid.

So maybe Dickensian is not quite the mash-up the BBC has been gamely proclaiming (a bit like one’s ageing uncle daringly describing something as ‘wicked’). The mash-up phenomenon works best in the digital world of quickfire multi-media juxtapositions: it’s an essentially youthful art, at odds with the literary (sorry, fan fiction fans!). Dickens’ great writing is what underpins Dickensian; it takes a fair bit of hubris to challenge the man at his own game. Little Nell’s already made a miraculous recovery (retrospectively ruining one of Oscar Wilde’s best lines). Is nothing sacred? Tony Jordan apparently has another 40 episodes in his pocket, trusting that the BBC will commission them; now that really is hubris. Will this acknowledged master of television writing knit the tangled web of storylines together seamlessly in the end? We’ll have to wait for the Gogglebox verdict.