Scroll
Skip to content
HomeBlogFar From The Madding Crowd 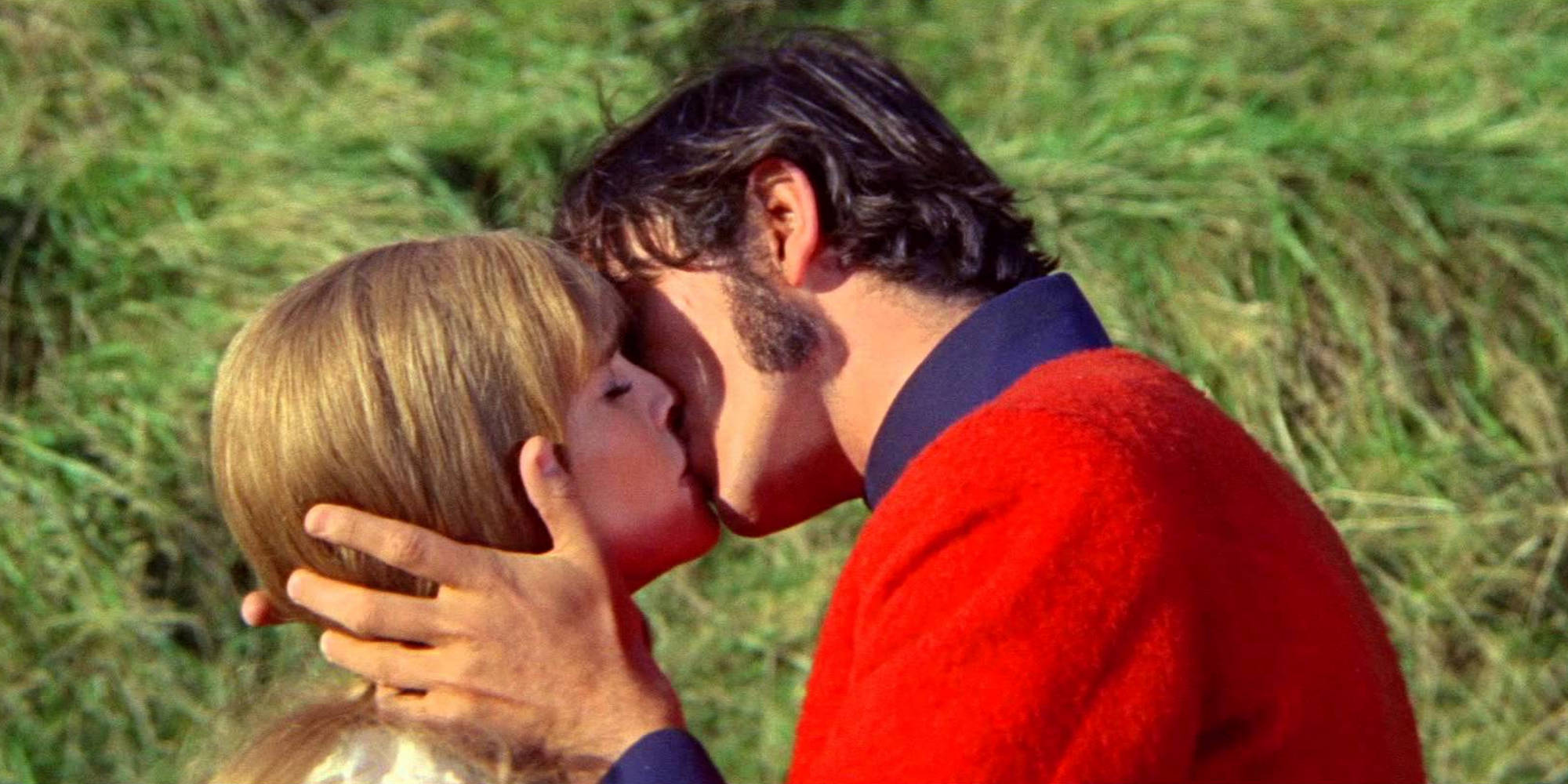 Far From The Madding Crowd

Sally Minogue sets the BBC premier of the 2015 film adaptation alongside its 1967 predecessor.

Child of the sixties as I am, any film adaptation of Far From The Madding Crowd has to bear comparison with the 1967 John Schlesinger film (MGM) starring Julie Christie as Bathsheba Everdene. Many illustrious names were contributors to that adaptation. The screenplay was written by Frederic Raphael, who had won an Oscar for the screenplay of another Schlesinger film, Darling, in 1965; Nicolas Roeg, later to become a significant film director, was here responsible for the lush cinematography; and Richard Rodney Bennett wrote the music. These stellar names continued into the cast – Alan Bates as a brooding Gabriel Oak, Peter Finch as the desperate Boldwood, and a dashing Terence Stamp as Sergeant Troy. The extended scene of Stamp/Troy’s swordplay round the head of a rapt Julie Christie/Bathsheba, the blade creating a whirling, dazzling, dangerous net around her, formed the iconic image of erotic passion for a whole generation.

For an interesting account of the way the swordplay scene was built up by Nicholas Roeg, go to this recent interview with Terence Stamp, which also includes clips from the scene.

That scene is important, in the novel as in any adaptation, because through it we must believe that the determinedly independent Bathsheba, who for the previous 27 chapters has been becoming progressively more and more her own woman, and who has demonstrated her hostility to surrendering herself to a man through marriage, now suddenly submits to man, marriage and loss of independence in the flash of a sword blade – and her first kiss. Hardy’s description of the ‘hollow amid the ferns’ in which the encounter takes place endows the ‘midsummer evening’ with all the sensuous longing that Bathsheba does not yet know she has. The ‘tall thickets of brake fern’ through which she passes are ‘plump and diaphanous … radiant in hues of clear and untainted green’. In Hardy’s characteristic manner, the landscape itself seems to take on the qualities of its human inhabitants: ‘… while the bristling ball of gold in the west still swept the tips of the ferns with its long luxuriant rays, a soft brushing by of garments might have been heard among them, and Bathsheba appeared in their midst, their soft feathery arms caressing her up to her shoulders.’ In the same way, the point of the sword caresses the air around her, albeit much more dangerously: ‘Beams of light caught from the sun’s low rays, sparkled above, around, in front of her – all emitted by the skilful evolutions of Troy’s reflecting blade … In short, she was enclosed in a firmament of light, and of sharp hisses, resembling a sky-full of meteors close at hand.’

Not something a girl could easily resist. And Bathsheba is still a girl; though at twenty she has the confidence to take on her uncle’s farm, and though as she herself asserts to Gabriel when he first proposes to her, ‘I am too independent’, nonetheless in matters of the heart’s and the body’s passions, she is still entirely inexperienced. The flood of physical feeling that Troy releases is enough, Hardy intends us to think, to sweep away any rational reflection, including her suspicion of marriage. And of course, for a woman of Bathsheba’s standing, marriage is the only route to sexual pleasure. Here her fate is contrasted with that of Fanny Robin, materially poor and lowly in class. Fanny has submitted to Troy’s enticements well before Bathsheba appears on the scene, and though he indeed had intended to marry her, she is punished first with the sad accident of going to the wrong church, thus missing the chance of respectability and happiness, and then with the pregnancy that kills her.

The swordplay chapter, 28, is placed exactly centrally in the novel; it marks the start of Bathsheba’s decline, and the trajectory of the novel towards tragedy, but it also begins the process of Bathsheba’s self-reflection and painful growth into maturity. And the treatment of this crucial scene is perhaps the underlying weakness of the BBC Films 2015 adaptation, directed by Thomas Vinterberg. This is in part because Troy, as played by Tom Sturridge, is presented as a Victorian moustache-twirling villain with little depth; and though the scene is set accurately in a ferny hollow, the sequence is relatively short and we don’t get a sense of the dynamic, almost ethereal, the beauty of the swordplay. And we are to believe that Bathsheba’s seduction is sealed not just with a kiss but with a lusty grab of her crotch. Ok – we’re in 2017, not 1870; but in all other respects, the film is almost fanatically true to its period. And as Hardy shows all too well, for the sexually innocent Bathsheba, a kiss is sufficient.

Much was expected of this adaptation, since Thomas Vinterberg is one of the originators, alongside Lars von Trier, of the Dogme 95 movement and manifesto, and the director of one of its masterpieces, Festen. This doesn’t claim to be a Dogme film and shows little sign of any of its purist film-making principles. It does, however, give a convincing representation of one ethical principle which is central to Hardy’s novel: that true love grows from joint and equal labour. The scenes which show Bathsheba (a spirited but sensitive Carey Mulligan) and Gabriel Oak (a strong and largely silent Matthias Schoenarts) at work together are the ones that catch their inherent harmony. At the sheep-washing (Chapter 19, though in the novel she stands watching rather than immersing herself alongside Gabriel in a sort of agricultural baptism), grinding the shears (Chapter 20), and saving the ricks in the storm (Chapter 37) – these are the pivotal scenes of the film. The representation of the rick covering reveals their mutual delight in the excitement of the storm, combined with the seriousness of their task, echoing qualities in Hardy’s writing which anticipate D. H. Lawrence. Here is a deeper thrill and a longer-lasting one than any Troy can produce, even in marriage.

This is another key point in the narrative where Bathsheba begins to understand Gabriel’s devotion, by contrast with her new husband’s dereliction. The unfolding story of Troy’s previous commitment to Fanny Robin completes that education, prompting her only now to reflect: ‘Until she had met Troy Bathsheba had been proud of her position as a woman; it had been a glory to her to know that her lips had been touched by no man’s on earth, that her waist had never been encircled by a lover’s arm. … that she had felt herself sufficient to herself, and had in the independence of her girlish heart fancied there was a certain degradation in renouncing the simplicity of a maiden existence to become the humbler half of an indifferent matrimonial whole, were facts now bitterly remembered.’ (Chapter 41) From reflecting on her own distress, Bathsheba moves to admiration for Gabriel Oak’s capacity for ‘enduring things’ which she sees springs from the fact that ‘those [interests] which affected his personal well-being were not the most absorbing and important in his eyes.’ She can thus learn compassion for the dead Fanny and her baby, though not unmixed with the pain of jealousy. (Chapter 43) It is only after Troy’s death at the hands of Boldwood – for which she takes some responsibility – that she can feel true deep pity for both Troy and Fanny, expressed in her having Troy’s body interred with Fanny’s, and their connection inscribed on the gravestone first engraved in Fanny’s memory by Troy. (Chapter 56)

It is the great triumph of Hardy’s novel that he makes a young woman, and a flawed one, the hero of his story. As Carey Mulligan points out, the very open, responsive nature of Bathsheba, which can be seen as a weakness, since it produces some ill-thought decisions, contributes also to her being one of Hardy’s strongest women characters.

Not for her Tess’s sacrifice, or Eustacia Vye’s overweening and finally tragically egocentric passion (The Return of the Native). Far From the Madding Crowd provides one of Hardy’s rare happy endings, but one that the narrative arc of the novel has prepared us for well. For once, a Hardy woman is not taught a lesson, rather she learns one. Bathsheba and Gabriel, at last, find a love that is equal on both sides, founded on shared labour and adversity, and on honesty. If Hardy’s description of it is less than rousing (‘Theirs was [a] substantial affection … the romance growing up in the interstices of a mass of hard prosaic reality’), here the 2015 film does do justice in its final scene, combining the beauty of the Dorset countryside with Bathsheba’s declaration – not one of submission, but rather an act itself of independence, admitting she needs Oak’s love to accompany her through their shared lives. And, of course, a kiss.