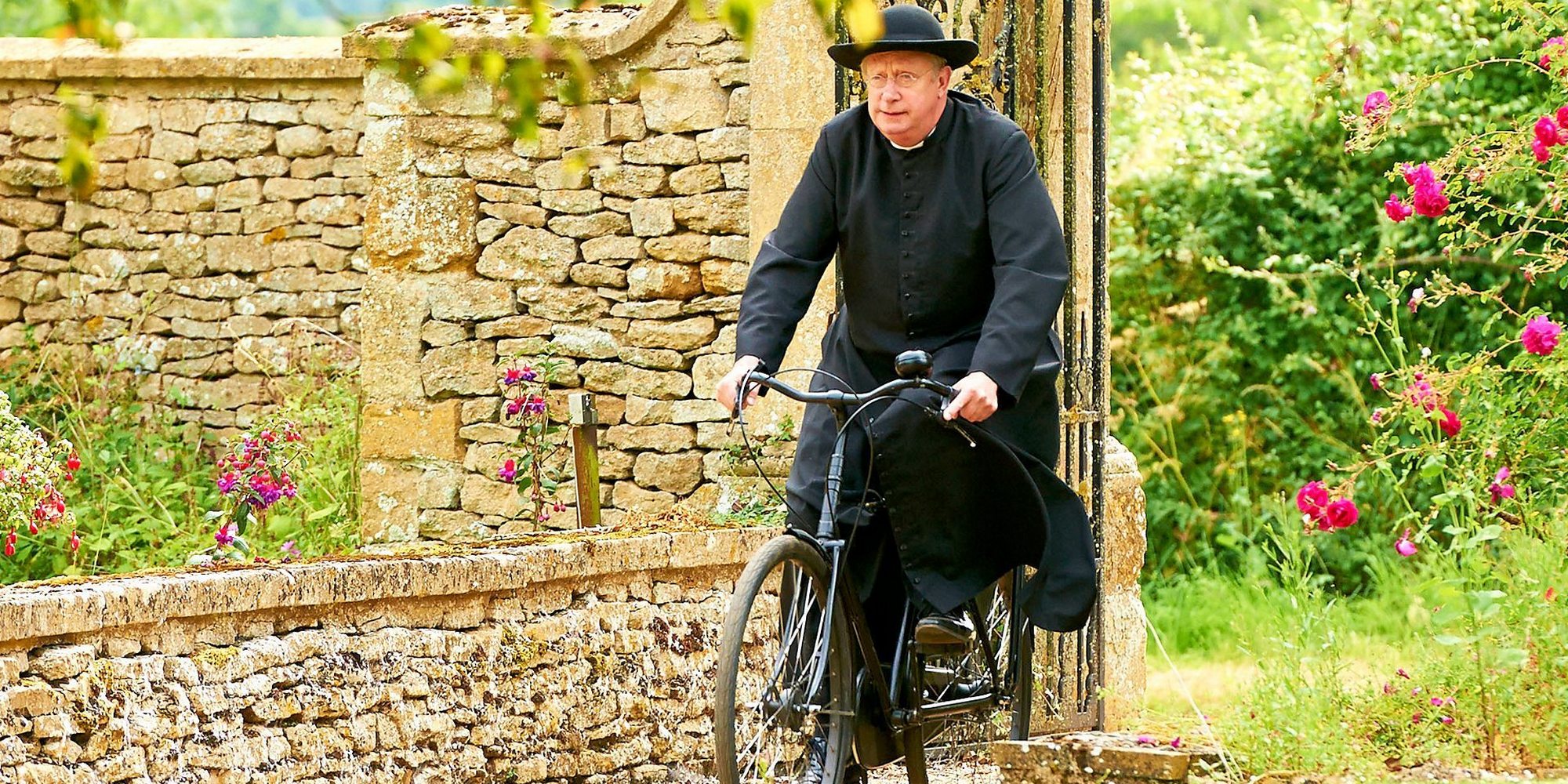 David Stuart Davies looks at the history of the ever-popular priest with a flair for detection.

You can’t keep a good detective down. Despite being created over a hundred years ago, Father Brown, the sleuthing cleric is once more in vogue as the very popular BBC television series starring Mark Williams has proved. This fascinating character, the mild-mannered priest with a brain as sharp as a scythe, was the brainchild of G. K. Chesterton (1874 – 1936). He was based on a Roman Catholic curate, Father O’Connor, whom the author encountered on a walking holiday in Yorkshire in 1903. Chesterton was taken with Father O’Connor’s apparent innocence regarding worldly matters but he realised that actually, the priest had a great understanding of the dark way of human nature. Chesterton stated in his autobiography:

‘… there sprang up in my own mind the vague idea of… constructing a comedy in which a priest should appear to know nothing and in fact knew more about crime than the criminal.’

While this gentle, quiet cleric, with his ever furled umbrella, ‘face round and dull as a Norfolk dumpling’ and ‘eyes as empty as the North Sea’ is to all appearances unremarkable, he does solve some of the most bizarre crimes ever recorded including a killer who can’t be seen (‘The Invisible Man’); a man’s head virtually crushed by one blow of a small hammer (‘The Hammer of God’), and a famous man commits ‘a fearful sin’ by figuratively growing a forest to hide a leaf (‘The Sign of the Broken Sword’).

The first Father Brown detective story, ‘The Blue Cross’ appeared in The Storyteller in September 1910. It was successful enough to prompt Chesterton to pen more and in the end, there were six collections of stories featuring the character: The Innocence of Father Brown (1911); The Wisdom of Father Brown (1914); The Incredulity of Father Brown (1926); The Secret of Father Brown (1927); and Scandal of Father Brown (1935). It is interesting to note the twelve-year gap between the second and third collections. This is because Chesterton, rather like Conan Doyle before him, grew tired of his detective hero. It was only increasing financial burdens in the 1920s, brought about by the launching of the author’s own magazine, G.K’s Weekly that forced Chesterton to bring Father Brown back to investigate further crimes. When informed by his wife that their bank balance was low, Chesterton would sigh and say. ‘That means Father Brown again.’ The parallels with Conan Doyle are uncanny: in later life, Doyle only turned to write Sherlock Holmes stories when he needed money to fund his work concerning Spiritualism.

However Father Brown is a very different detective from Holmes. Ian Ousby observed in The Crime and Mystery Book (1997) that, ‘[Father Brown] is one of the few early detectives, if not the only one, to escape successfully the long shadow cast by Sherlock Holmes’. It is therefore his uniqueness that elevates him and makes him interesting. The cleric relies on intuitive detection, psychological insight and extraordinary knowledge of philosophy and moral teaching. His God-given goodness allows him to see into the hearts of men and identify the sinner. Indeed it could be said that while Sherlock Holmes has his Doctor Watson, Father Brown has help from a much higher plane. What need has he of science – the magnifying glass, the microscope, the fingerprint powder – to solve crimes when he has his faith and divine alliance? It is also true that Father Brown is as much concerned with the possible redemption of the culprit and saving his soul as he is with solving the crime.

His modus operandi is simple: he discovers clues and motives from the very nature of the crime. He explains his approach thus: ‘I try to get inside the man. I am inside the man, moving his arms and legs, but wait until I know I’m inside a murderer, thinking his thoughts, wresting with his passions… And when I feel like the murderer, of course, I know who he is.’

In these stories, Chesterton was breaking all the accepted rules of detective fiction. He does not tell us if the windows were locked if there is a bloodstain on the wall or footprints on the lawn. The very merit of Chesterton’s artifice is his ability to ignore such things, to leave out everything extraneous to the single theme he wishes to develop within the narrative. Certainly, the stories are not exercises in deduction; rather they have inspired magic tricks with the illusion explained at the end.

Julian Symons, crime writer and critic, observed in Mortal Consequence: A History from the Detective Novel to the Crime Story (1972) that ‘the best of these tales are amongst the finest crime stories ever written.’ However I would qualify this praise by adding that this is not purely because of the cleverness of the plotting, but also because of the brilliance of the writing, which is always rich in atmosphere and detail, full of telling phrases and often very funny.

Father Brown first appeared on the screen in a 1934 American movie, Father Brown Detective starring Walter Connolly. It was based on Chesterton’s story ‘The Blue Cross’ as was the 1954 movie, Father Brown with Alec Guinness donning the cleric’s garb. In 1974, Kenneth More starred in a 13-episode Father Brown TV series, each episode adapted from one of Chesterton’s short stories. In 2012, the BBC commissioned the 10-episode series Father Brown starring British actor Mark Williams in the title role. It proved so popular that it at the time writing run into five series. The era and location have been moved to the Cotswolds of the early 1950s and the series has used both adaptations of the Chesterton tales and original stories.

No other writer has come up with a detective original enough to match Chesterton’s little priest, a figure so insignificant that he achieves great significance. That is part of the magic of Chesterton’s literary paradox and like all great fictional characters, Father Brown lives on and entertains long after the death of his creator. 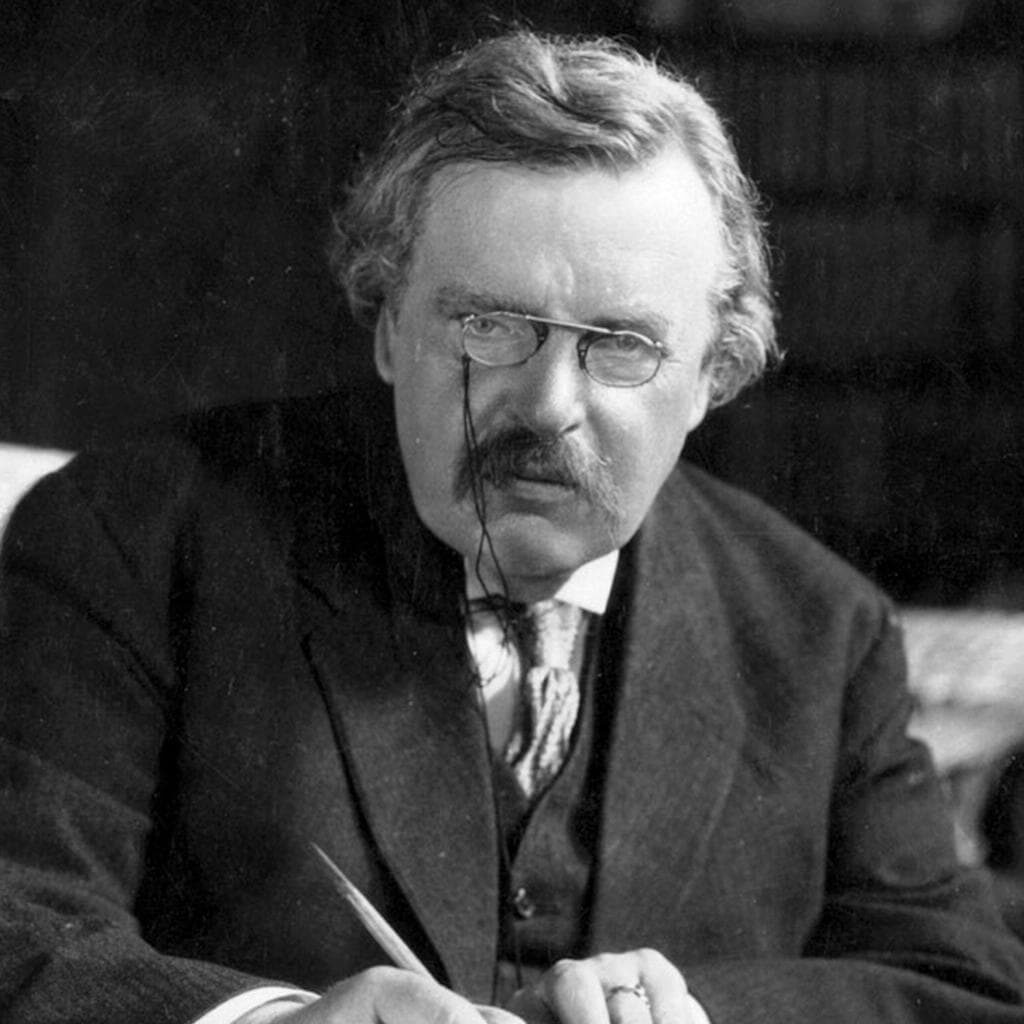 Gilbert Keith Chesterton (1874-1936) was an English writer, critic, playwright, historian and theologian. From his massive output of work, he is now remembered principally for his fifty-two short stories of Father Brown, the cleric turned detective.