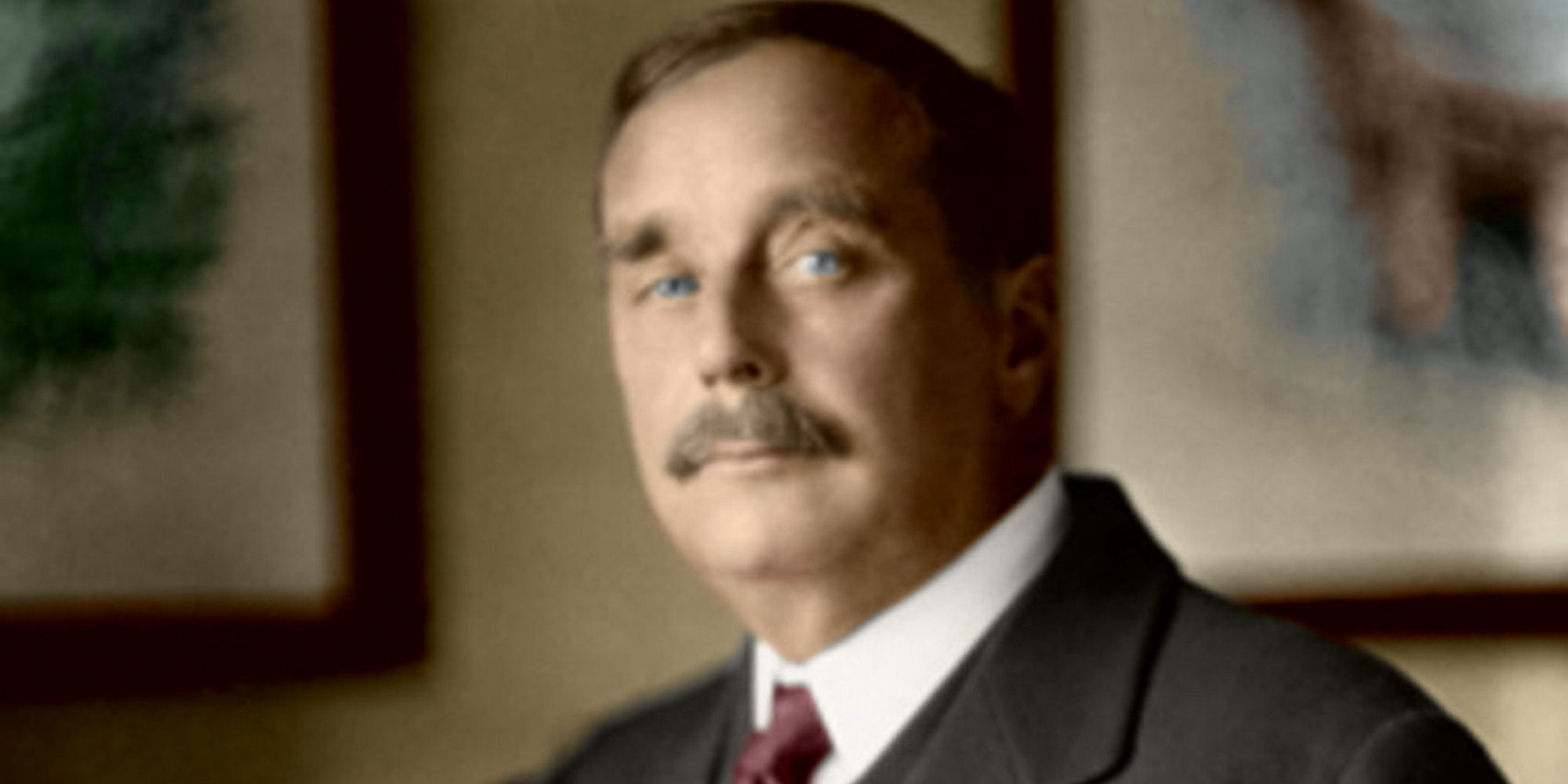 H. G. Wells’s scientific romances are best known for their fictional commentaries on the state of Western, human society and its possible futures. Wells is not a ‘nature writer’ in the way that some of his contemporaries like Richard Jefferies and W. H. Hudson were. Nevertheless, the natural world, in the forms of landscapes, animals and plants, pervades a great many of his novels and short stories. A closer look at Wells’s representations of nature reveals how, as in so many other ways, his enduring and prescient fictions are in dialogue with the prevailing beliefs and debates of his day about the natural world and human relationships with it.

Wells had little time for constructions of nature as divinely created and ordered, or for Romantic ideas of nature as moral redemption, balm for the soul, or sanctuary from industrialisation. He had turned more or less completely from his conventional Christian upbringing upon gaining a scientific education and became a committed Darwinist, understanding the universe as thoroughly material and governed by inevitable processes such as natural selection and the laws of thermodynamics. As shown by novels like The Time Machine (1895) with its narrative of human degenerative evolution into two inferior subspecies and ultimately extinction, human beings were just as much subject to these rules as any other living species.

The Time Machine follows evolutionary and thermodynamic logic to bleak conclusions: the gradual devolution and simplification of animal life and the heat-death of the solar system. By conceiving humanity as subjugated to natural processes, Wells ran counter to some more popular ways of thinking. For many, the sophisticated state of Victorian civilisation, with its advanced communication and industrial technologies, science, art, and Empire, showed that people had landscapes and natural resources under control and put to good use. Conceptions of human mastery over nature in Western thought stretch back at least to Francis Bacon, further defined along Cartesian lines dividing mind from body, rationality from instinct, human from animal, culture from nature, civilised from savage. But Wells’s early scientific romances tend to overturn such assumptions of social and intellectual progress or human superiority over nature.

The War of the Worlds (1898), for example, begins with an image of humanity as a collection of microbes, watched by the alien Martians ‘almost as narrowly as a man with a microscope might scrutinise the transient creatures that swarm and multiply in a drop of water’. This opening gives a reader due warning, perhaps, of a story that relentlessly crushes all examples of the British human ego. The heart of the British Empire is invaded, its advanced weaponry is useless, religious faith is powerless, and people themselves find they are no different to other animals in the Martians’ eyes. The narrator compares himself to a rabbit; he experiences ‘a sense of dethronement, a persuasion that I was no longer a master, but an animal among the animals, under the Martian heel’. Lastly, the final insult comes in the form of victory over the Martians of Terran bacteria. In war as in peace, humanity relies for survival on these most humble and simple of organisms.

By the time of The War of the Worlds, Wells had already dwelt frequently on these themes. In The Island of Doctor Moreau (1897), similarly, narrator Prendick must confront his similarity, not his superiority, to the Beast People created by Moreau, recognising both the humanity in them and the animalism in himself. Wells’s first full-length novel, The Time Machine, explicitly tackles questions of human mastery over nature: where it might lead, and its limits.

When the Time Traveller arrives in the year 802701, he initially believes he has stumbled into a utopia, an impression created not least by the marvellous garden in which the childlike Eloi live: ‘everywhere were fruits and sweet and delightful flowers; brilliant butterflies flew hither and thither’. He attributes this paradise to agricultural and horticultural developments; human science will evidently enable manipulation of the natural world at will. In the future of his own time, he perceives, ‘one triumph of a united humanity over Nature had followed another’. Global cooperation will set the progress of civilisation on an upward trajectory: The whole world will be intelligent, educated, and co-operating; things will move faster and faster towards the subjugation of Nature. In the end, wisely and carefully we shall readjust the balance of animal and vegetable life to suit our human needs.

The Time Traveller expresses his confidence that mastering nature in support of human ends is possible and desirable; nature, here, is a resource for human use, and perfect control of it is a utopian aim. Yet Wells leaves clues in the text that hint at the Time Traveller’s mistake; earlier in the same chapter, his very first glimpse of the Eloi world is of ‘a tangled waste of beautiful bushes and flowers, a long-neglected and yet weedless garden’. At some point, humans have ceased to tend to their subjugated environment; the plants grow in a heedless tangle. Humanity had ‘used all its abundant vitality to alter the conditions under which it lived’, and ‘a perfect conquest of Nature’ led to feeble adaptations to an easy life instead of an energetic struggle for improvements. In this way, The Time Machine critiques and corrects what Wells saw as the flaws in utopian writing that presented people living in perpetual harmony with nature, which in fact is always changing: the beautiful, static worlds of William Morris’s News from Nowhere: an epoch of rest (1890) and Hudson’s A Crystal Age (1887) seemed to ignore time’s arrow, the inescapable logic of evolutionary adaptation, and the entropic trend of the second law of thermodynamics. Humanity – like all of nature – disregarded these laws at its peril.

However, humanity’s moral and intellectual ingenuity might save it yet. Wells’s own concept of utopia, outlined at length a few years later in A Modern Utopia (1905), is ‘kinetic’, recognising the dynamic, changing nature of people and their environments. Wells was a disciple of naturalist T. H. Huxley, who argued in Evolution and Ethics (1893) that humanity had the capacity to resist the ‘cosmic process’ – that is, evolutionary mechanisms – and direct its future according to an ‘ethical process’. ‘Intelligence and will’, Huxley wrote, ‘guided by sound principles of investigation, and organised in common effort, may modify the conditions of existence’. Over time, ‘cosmic nature’ could be replaced by ‘ethical nature’; the most powerful and overarching natural laws losing their sway in the face of the emergence of an ethical, scientific, and cooperative humanity. The Time Machine, accordingly, ends on a note of hope that humankind could live differently and avoid the bleak future witnessed by the Time Traveller, while Wells’s Modern Utopia is organised along Huxley’s ethical, cooperatives lines against the cosmic process: ‘man is the unnatural animal, the rebel child of Nature’ and ‘in the Modern Utopia he will have set himself to change the ancient law.’ it is judiciously managed by a scientific elite, the samurai, while an advocate of a ‘Return to Nature’ is mocked as a ‘purveyor of absurdities’.

These early works offer a snapshot of ideas about social organisation and humanity’s relationships with its environments to which Wells would regularly return in later writing. They retain considerable contemporary relevance in a modern world strongly inflected by instrumental attitudes to nature, problems of a changing environment, and social injustices. Wells’s insights that humanity must accept the strength of natural laws, but use our unique abilities and control of resources for the benefit of the many rather than the few, remain important, while his eloquent stories still speak to us about our world, our place in nature, and our choices.

Dr Emily Alder is a lecturer in Literature and Culture at the School of Arts & Creative Industries, Edinburgh Napier University