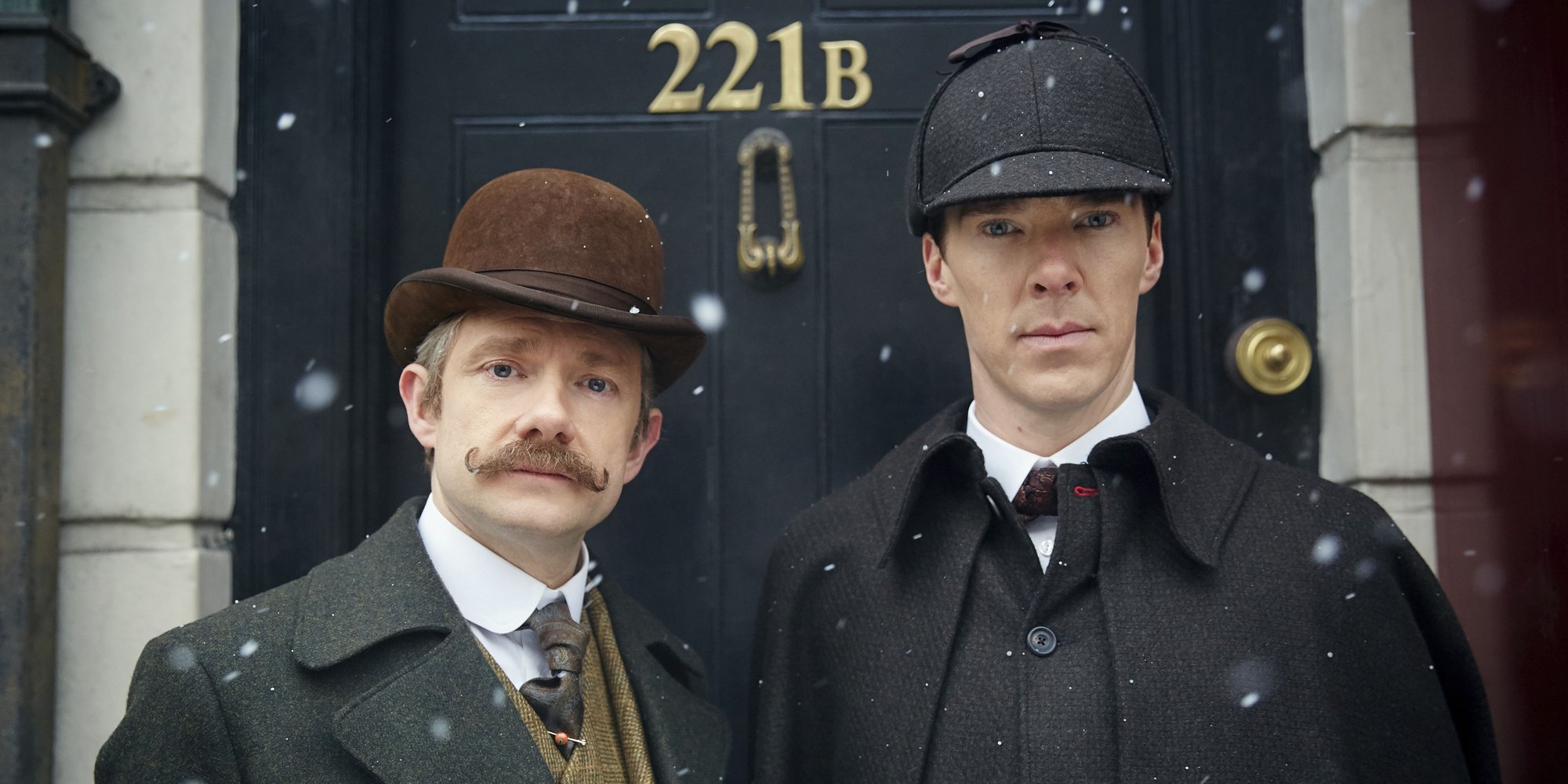 When was the last time you said to yourself, I’m in need of a real laugh – so I’ll read a Sherlock Holmes story? Not often, I guess – but actually, there is a great deal of humour in the Holmes tales. This derives either from the detective’s dry, sarcastic wit or Conan Doyle’s impish sense of humour.  The author often places ridiculous and comic elements into his narratives – elements that have all the resonances of a Monty Python sketch. Take  the story ‘A Case of Identity’, for example, in which Doyle, through Holmes, asserts that a fellow called Dundas ‘fell into the habit of winding up every meal by taking out his false teeth and hurling them at his wife.’  Certainly, the idea is at least absurd if not farcical.

In the same story, Doyle is comically ungallant about the somewhat large heroine Mary Sutherland, having Watson, the narrator, describing her, standing behind Billy the page boy, in the Baker Street sitting room,  as being ‘like a full-sailed merchantman behind a tiny pilot boat.’ A phrase that has all the wit and style one finds in the works of P. G. Wodehouse.

Further evidence of Conan Doyle’s puckish sense of humour is found in ‘The Red–Headed League’, the plot of which has all elements of a Gilbert & Sullivan operetta. For instance, we have a bizarre scene where a horde of red-headed men is queuing up to join the League, which has offered a monetary reward to the man in possession of the richest of red thatches. Some of the hopefuls have gone to the extreme of painting their hair red in order to convince. There is a representative from the League in attendance employed to tug at the crimson locks of these eager applicants to test if they are genuine and are not wearing a highly coloured wig. Holmes’ client, Jabez Wilson, is the only successful candidate and when the League closes down unexpectedly, he tries to locate their headquarters and is led to an address which turns out to be the ‘manufactory of artificial kneecaps’. Doyle knew that this plot was risible and so he has Holmes find it so also, allowing the reader to share the amusement:

‘Sherlock Holmes and I surveyed this curt announcement and the rueful face behind it until the comical side of the affair so completely overtopped every other consideration that we both burst out in a roar of laughter.’

Humour is also found in the list of Holmes’ unrecorded cases, with comical titles mentioned by Doyle in a number of the stories.  These include the dreadful business of the Abernetty family first brought to Holmes’ notice by – wait for it – the depth to which the parsley had sunk into the butter on a hot day.  Who measured it? In fact, how can you measure sinking parsley? Are we meant to take this seriously? Of course not. It is a joke. Then there is ‘The Case of the Politician, the Lighthouse and the Trained Cormorant.’  How do you train a cormorant and what do you train a cormorant to do? The mind boggles. No doubt if Holmes had the time he would have tackled the strange affair of the lion the witch and the wardrobe! All these incidental inclusions by Doyle are there to amuse and provide the reader with a smile. And I suppose it is the author’s way of saying, don’t take these stories too seriously.

The list of unrecorded cases has intrigued readers for many years. Other such titles include: ‘The Case of Colonel Warburton’s Madness’, ‘The Arnsworth Castle Business’, ‘The Tankerville Club Scandal’, ‘The Colossal Schemes of Baron Maupertuis’, ‘The Adventure of the Paradol Chamber’, ‘The Amateur Mendicant Society’  and ‘The Loss of the British Barque, Sophy Anderton’. These untold investigations have given other writers, following in Arthur Conan Doyle’s footsteps, the challenge to create a Sherlock Holmes story to fit. Challenge indeed for some of the demands of these titles call for remarkable ingenuity on behalf of the writer. It takes a brilliant mind to create something effective out of ‘The Adventure of the Tired Captain’ for example.

Using these titles is part of the whole industry of providing the world with more stories, more cases, and more adventures featuring Sherlock Holmes. Conan Doyle only bequeathed fifty-six short stories and four novels to the reading public and the world demands more.

That was the thinking behind the brilliant BBC TV series Sherlock. However, writers Steven Moffat and Mark Gatiss took the unusual step of lifting the famous detective and his biographer, Dr Watson out of their original milieu and dropping them into modern-day London. Wisely they have retained the true nature and characters of Holmes and Watson and kept the humorous touches found in the original tales. It was a brave and daring move – but one that has worked brilliantly, revealing that Holmes is a man of all ages. Of course, the idea is not completely new. Universal did it in the 1940s with Basil Rathbone’s Holmes who drove around in motor cars, flew in aeroplanes and tackled the Nazis.

However, for the Christmas special of 2015, Moffat and Gatiss decided to take Holmes and Watson back to their original Victorian setting with all its trimmings – pea souper fogs, Hansom cabs, frock coats etc. And interestingly, they have raided Conan Doyle’s stash of unrecorded cases for this venture. In a list of such investigations given to us in Doyle’s story ‘The Musgrave Ritual’ is one which Watson calls ‘the case of Ricoletti of the club-foot and his abominable wife.’ Moffat & Gatiss have lit up the final phrase to create a new mystery for Holmes, one which is both gothic, having touches of the supernatural, but has its comical moments also. These writers have assured fans that this Victorian romp is a one-off – but one wonders, if it is a great success, whether they may weaken in this resolve. After all, they have a whole list of possible cases to choose from. How about ‘The Singular Affair of the Aluminium Crutch’ or ‘The Affair of the Vatican Cameos’?