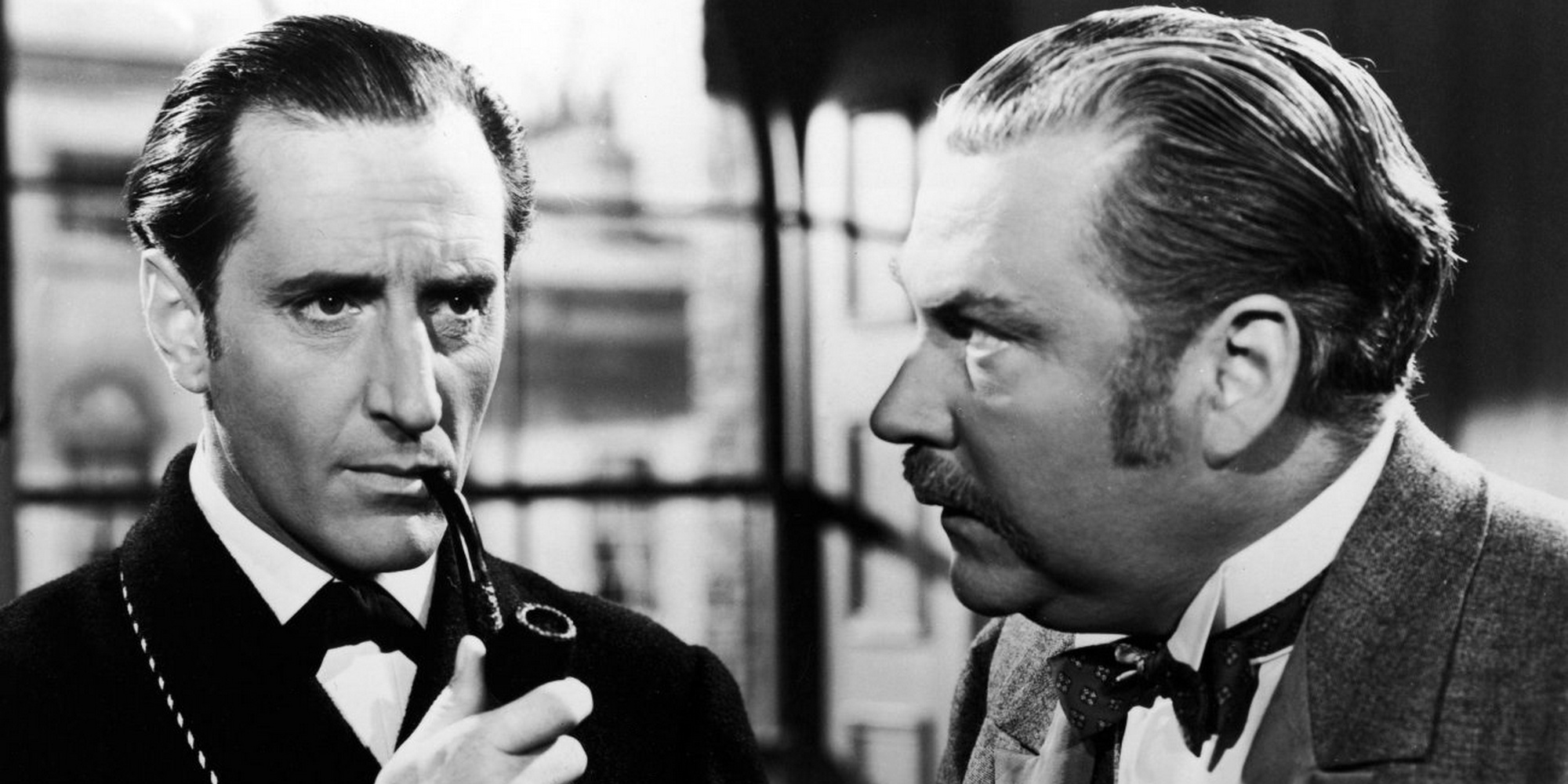 In Part Three, David Stuart Davies looks at the work of Basil Rathbone and Peter Cushing.

It is interesting to note that all the films up until the late 1930s were set in the period in which they were made instead of in the Victorian or early Edwardian era of the original stories. Also, the actor playing Watson was always placed well down the cast list far away from the star billing. All this changed when Twentieth Century Fox employed Basil Rathbone as Holmes and Nigel Bruce as his faithful companion in their version of The Hound of the Baskervilles (1939). The film was set in the late Victorian period and for the first time, Watson was given equal billing with his Holmes. Film-makers had always had a problem with what to do with Watson. He is a shadowy figure in the stories because he is in the background relating events, a process which is difficult to emulate on screen. Fox found the solution to the problem by making the good doctor a comic character. While Bruce raised Watson’s profile in an uncanonical way, Rathbone became the authentic Holmes for a generation of filmgoers. With his fine aquiline profile, that guillotine of a voice and supercilious arrogance he seemed to have leapt off the pages of the Strand. In reviewing the Hound, Graham Greene described Rathbone thus: ‘That dark knife blade-face and snapping mouth, an eager face, wearing an expression of high strung energy’. The film was a success and was followed within the year by The Adventures of Sherlock Holme. These two movies sold Rathbone and Bruce into Sherlockian slavery. Very shortly afterwards they became involved in a highly successful long-running radio show sponsored initially by Bromo Quinine and then by Petri Wine, fondly remembered by American aficionados, and others. Fox no longer cared to finance further expensive Victorian-based films, but in 1942 Universal began a series of B movies starring Rathbone and Bruce as the Baker Street, duo, transporting them to modern London. The films were prefaced by a screen statement that announced:

‘Sherlock Holmes, the immortal character of fiction created by Sir Arthur Conan Doyle, is ageless, invincible and unchanging. In solving significant problems of the present day he remains – as ever – the supreme master of deductive reasoning.’

The first three films in the series used the current war as a backdrop and Holmes was engaged in fighting the Germans and unmasking secret Nazi spies. Even Moriarty (an oriental-looking Lionel Atwill in full melodramatic mode) was on Hitler’s side in  Sherlock Holmes and The Secret Weapon (1942). After the third film in the series, the plots moved away from the war theme and although there were motor cars and telephones and other modern accoutrements, the mood was essentially Victorian and gothic and all the better for it.

However, Rathbone grew tired of playing the character and, after twelve movies, he decided to jump ship when the time came to renew his contract with Universal in 1946 for further Holmes films. This move stunned the studio and for a time created a rift between Rathbone and his friend Nigel Bruce who loved playing Watson and was keen to do more movies. In fact, Bruce continued the radio series with Tom Conway playing the detective. Although Rathbone turned his back on Holmes in 1946 he was destined never to lose the Sherlock tag. In 1953 at the age of sixty-one, he opened at the Century Theatre on Broadway in a new play, Sherlock Holmes, written by his wife Ouida. Unfortunately, the show was a creaky mish-mash, lacking dramatic verve, and closed after three performances.

The next significant screen Holmes was Peter Cushing who appeared in Hammer Films’ wonderfully lurid The Hound of the Baskervilles in 1958. Peter Cushing, a Holmes enthusiast, owning a collection of Strand magazines featuring the original stories, was delighted at the prospect. However, he was slightly concerned when he learned that producer James Carreras had presold his incarnation of the Great Detective as a ‘sexy Sherlock’. Nevertheless, he approached the part in a scholarly fashion, even changing some dialogue for it to be more authentic. Similarly, Cushing asked for parts of the Baker Street sitting room set to be modified: ‘Holmes had the habit of keeping correspondence fixed to the mantelpiece with his jack-knife… As fate would have it, the mantelpiece was made of marble because it was one they had in stock, so I asked them to put a piece of balsa wood on top of it.’

Watson was played by another Hammer stalwart, Andre Morell, who gave what was generally regarded as the most realistic, solid and sensible portrayal of the Doctor on film to date. He said: ‘It was agreed not to do Watson as a comic character. Conan Doyle, after all, felt that Watson was a doctor and not an idiot as he was often made out to be.’

Hammer was keen to make the actual Hound as frightening as possible in order to obtain an X certificate for the film which they felt sure would increase their box office takings but this proved problematic. Cushing remembered that they dressed two little boys as Holmes and Sir Henry Baskerville, placing them on a miniature set a large dog. ‘And that’s what it looked like – two small children dressed up, a big dog and a small set…. It looked ludicrous’.

Sir Nigel Films, a company formed by the Sir Arthur Conan Doyle Estate to film his works, was the moving force behind another ‘horror Holmes’, A Study in Terror (1965). The premise of the movie was inspired – by that of pitting the world’s greatest detective against the world’s most fiendish killer, Jack the Ripper. Herman Cohen, the executive producer, was keen to present the character of Holmes as a kind of Victorian James Bond to capture the youth market, employing such phrases in the advertising campaign for the film as ‘Sherlock Holmes – the Original Caped Crusader’ – cashing in on the success of the current Batman TV series. One publicity statement announced: ‘No longer is Holmes the old fuddy-duddy which the public tended to classify him as in the past, he is now way out and with it.’ Cohen wanted to call the film Fog because he thought any picture with the word ‘study’ in the title would put off the teen punters. However, the film did achieve an X certificate, awarded for sexual elements implicit in the movie rather than its horror content.

Holmes was played by John Neville. As the Times observed: ‘Not perhaps everyone’s idea of Holmes… but the casting will serve.’  The real hit of the film is Robert Morley as Mycroft. Morley’s rotund appearance and sharp features fit exactly Doyle’s description of the character: ‘His body was absolutely corpulent, but his face, though massive, had preserved something of the sharpness of expression which was so remarkable in that of his brother.’ As the reviewer in the Sunday Telegraph noted ‘I knew that [Mycroft] had been Robert Morley from the beginning of time’.