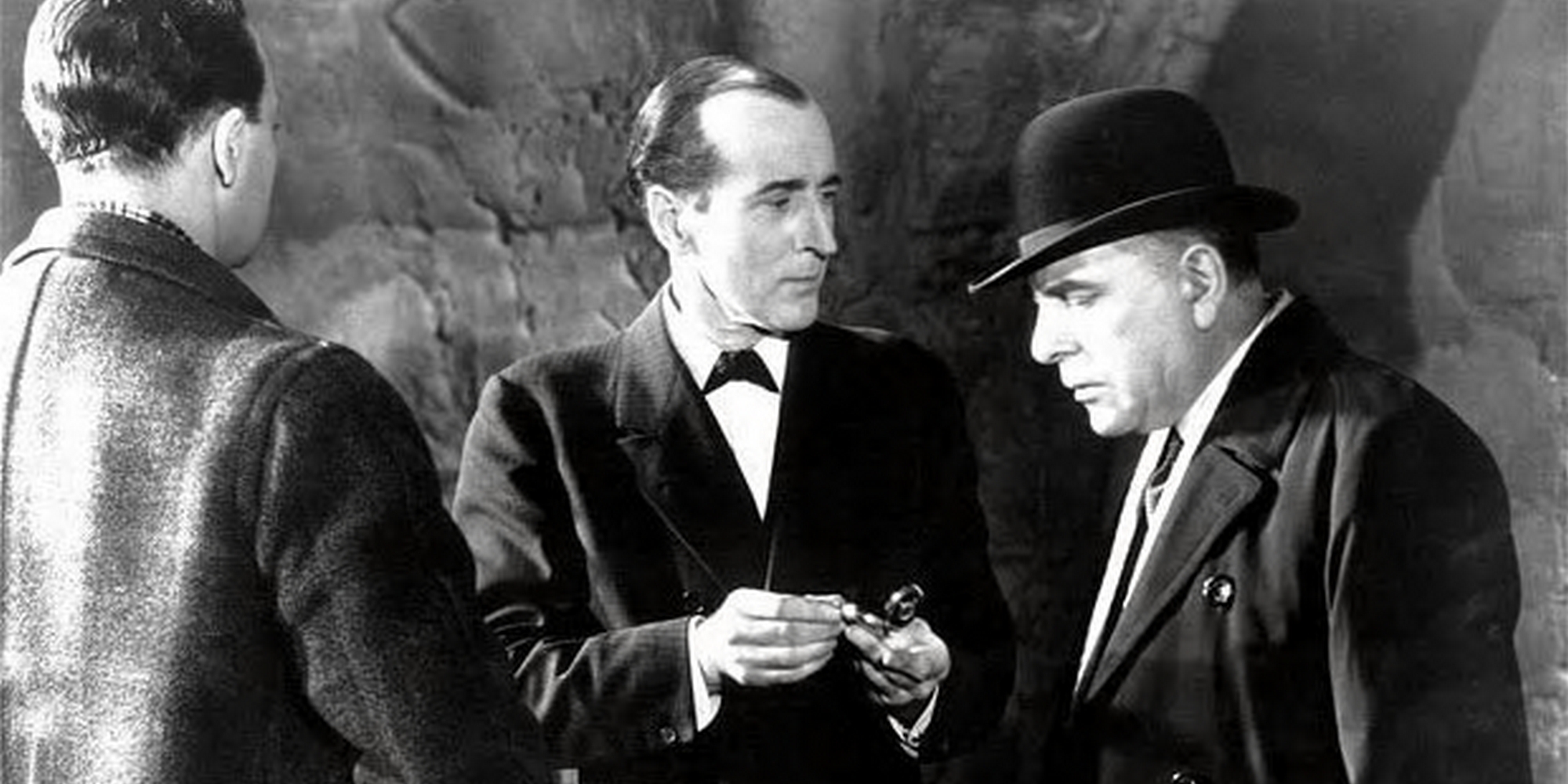 David Stuart Davies continues his series on Holmes on stage and screen.

Holmes is essentially a verbal character. He needs a voice to give expression to his theories and deductions and therefore silent movies could only present a limited version of the man. He really came into his own with the advent of ‘the talkies’. Sadly, however, the first sound Holmes feature, another version of the Hound, (1932) produced by Gainsborough Pictures was a dismal affair. Robert Rendel, a rather bland actor who had never starred in a movie before, was engaged to play Holmes. It was a strange choice for with his plump features and stout figure, Rendel looked nothing like the popular conception of the character. Variety recorded that: ‘[Rendel] was far from the prepossessing figure of fiction’. But then this publication had little positive to say on any aspect of the picture: ‘[The film] was poorly cast, virtually none of the principals interpreting the Doyle characters as readers visualise them’ and ‘…at times the film even seemed a comedy version of the famous story.’

The real Sherlock star of the 1930s, the one who received the critics’ thumbs up for presenting ‘the perfect Holmes’ was Arthur Wontner who starred in five features.  Vincent Starrett, a doyen of American Sherlockian scholars, said of him: ‘… no better Sherlock Holmes than Wontner is likely to be seen and heard in pictures, in our time’. Conan Doyle’s widow, Lady Jean, wrote to Wontner expressing her approval and delight at ‘your really splendid acting… [and] masterly presentation of Sherlock Holmes’.

However, time has not been kind to these early talkies and viewed now, the series of films seem slow with Wontner appearing rather too relaxed, somewhat geriatric and avuncular. His delivery of the lines, while assuring the audience of the detective’s intellectual prowess, was so casual that he failed to capture the quixotic nature of Sherlock Holmes. He faced Moriarty in two of the movies The Triumph of Sherlock Holmes (1935) and Silver Blaze (1937). The Professor was played on both occasions with great relish in barnstorming fashion by Lyn Harding, who had already given us his over-the-top villain Grimesby Rylott in The Speckled Band in 1931. Harding’s very broad theatrical style, presenting the professor not so much as a mathematical genius but as a bruising gangster, contrasted greatly with Wonter’s smooth, quiet delivery, but nevertheless, the strange mix worked effectively.

Other Sherlocks of the thirties included Raymond Massey’s take on the character in the afore-mentioned The Speckled Band (1931), which was based on Doyle’s play rather than his story. Massey was young, tall, urbane and louche. Remarkably his Holmes was given an ultra-modern office, a typing pool of busy secretaries and an intercom. The detective even had a Dictaphone in his room that recorded conversations so that they could be filed for reference.

In America, Clive Brook appeared in two Sherlock talkies, The Return of Sherlock Holmes (1929) and Sherlock Holmes (1932). Brook was essentially a stage actor of the old school and in most of his film roles, he appeared as the perfect English gentleman with a rigid upper lip and a rather priggish manner. He played Holmes in much the same way. He hated the second movie: ‘It was ghastly from my point of view, bringing it up to date with gangsters from America and Holmes engaged to that girl… The American director lacked any respect for Conan Doyle’s characters, and ruthlessly introduced anything that he thought would be attractive at the box office’. The romance element, of course, was not new, having been taken from the Gillette play but the fact that Holmes’ sweetheart Alice managed to persuade the Great Detective to abandon his dangerous life to retire to a farm to keep chickens was perhaps an infelicity too far for most enthusiasts. It is also in this movie that apparently Holmes has invented a gadget that produces an electric ray which can immobilise motor cars, something that would seem more appropriate to a Saturday matinee serial rather than a Sherlock Holmes mystery.

Watson was played by the versatile Reginald Owen, who a year later would swop his doctor’s bag for the deerstalker and magnifying glass as a (rather plump) Holmes himself in Worldwide’s travesty of A Study in Scarlet. Owen’s Watson had an insultingly low profile in Brook’s film, featuring in only two scenes, even failing to appear at the end to act as Holmes’ best man because, as Billy the Page says, ‘his wife’s mother has had an attack of talking sickness.’ Ernest Torrence proved to be one of the best Moriartys whom one film critic referred to as ‘a restrained volcano of hatred and violence behind a mask of obsequious innocence.’

It is strange to note that all the Holmes films up to the late 1930s were set at the time of their filming. No attempt to create a Victorian milieu was ever attempted. It was to be Twentieth Century Fox in Hollywood who set about bringing the authentic Holmes to the screen in his rightful setting.