When I am preparing a blog, I often dwell on the novel or poetry I am writing about, and sometimes the author, for a few days or even weeks beforehand, so that other experiences often chime with that inner conversation. So it has been with Tess of the D’Urbervilles, Hardy’s great tragic novel with ‘A Pure Woman’ at its heart. In the recent bleak chill of winter, which has struck away the unseasonal warmth of November, and frozen on the stem my early camellias and very late roses and delphiniums, I remembered a winter scene from Tess. As with every season and landscape in this novel, so profoundly rooted in nature, the scene is metaphorical – but it is first and foremost realist:

In the afternoon the rain came on again, and Marian said that they need not work any more. But if they did not work they would not be paid; so they worked on. It was so high a situation, this field, that the rain had no occasion to fall, but raced along horizontally upon the yelling wind, sticking into them like glass splinters till they were wet through. …

Amid this scene Tess slaved in the morning frosts and in the afternoon rains. When it was not swede-grubbing it was swede trimming, in which process they sliced off the earth and the fibres with a bill-hook … if it was frosty even their thick leather gloves could not prevent the frozen masses they handled from biting their fingers. Anyone who has ever done field work will know what misery it can be in winter. Tess and Marian are grubbing up and trimming the swedes to provide fodder for sheep. But somewhere at this very moment workers will be doing the same job in the fields with swedes and sprouts for the Christmas table, hands frozen to numbness, bending to the fields as Tess and Marian bent, even if now from the back of a tractor. And they will often be doing piece work or hourly-paid work like their nineteenth-century equivalents, without the protection of fully-waged employment.

Tess and Marian work stoically and even sustain some youthful good spirits, but the physical hardship of the work reflects a far greater inner struggle for Tess, as she hopes for some message from her estranged husband Angel. When Hardy writes, ‘There had not been such a winter for years’, he invokes the old idea of pathetic fallacy, the weather and natural conditions reflecting empathetically the human condition. He takes this to almost supernatural lengths by using the harsh winter as a strategy to introduce into the bare English countryside:

strange birds from behind the North Pole … gaunt spectral creatures with tragical eyes – eyes which had witnessed scenes of cataclysmical horror in inaccessible polar regions of a magnitude such as no human being had ever conceived, 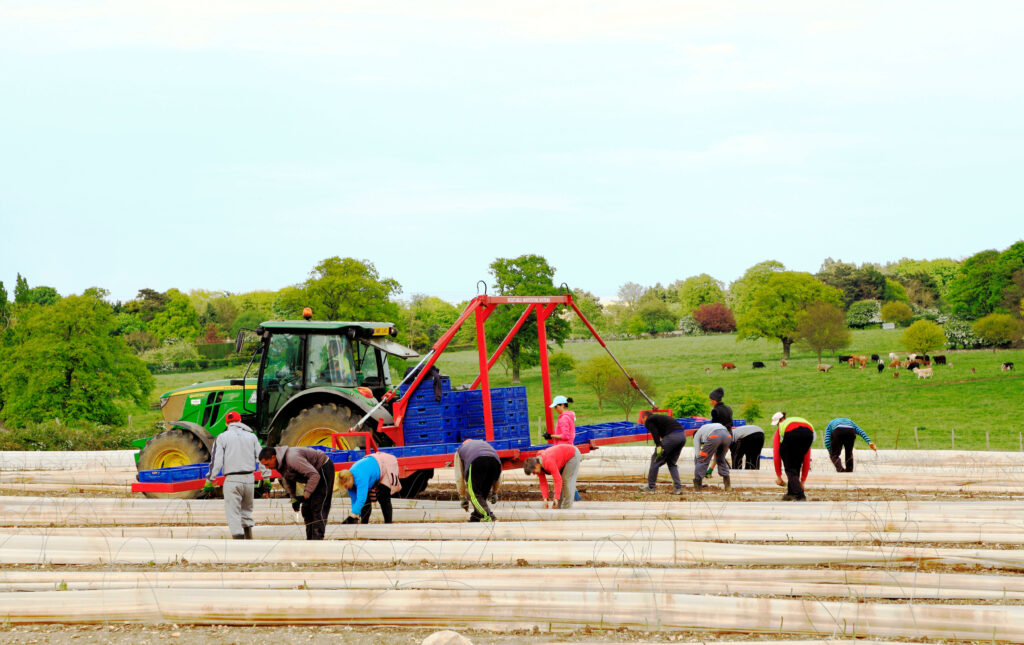 in curdling temperatures that no man could endure; which had beheld the crash of icebergs and the slide of snow-hills by the shooting light of the Aurora …

Shades of Mary Shelley’s Frankenstein! (1818) Hardy’s clever transition here from the harshnesses of an agricultural winter to the wastes of the Arctic with their Romantic freight of spiritual isolation, via the simple expedient of the migrating birds, also interestingly echoes the beginning of Jane Eyre (1847). With its memorable opening sentence, ‘There was no possibility of taking a walk that day’, the emotional timbre of Jane’s world is set, as ‘the cold winter winds had brought with it clouds so sombre, and a rain so penetrating, that further outdoor exercise was now out of the question’. While she retreats to the window-seat with a book, she still looks out on ‘the drear November day … Afar, it offered a pale blank of mist and cloud; near a scene of wet lawn and storm-beat shrub, with ceaseless rain sweeping away wildly before a long and lamentable blast’. Jane’s position looks almost one of comfort beside that of Tess, but as she turns to her book (Bewick’s History of British Birds) we find ourselves in the same desolate far Northern world as that conjured by Hardy, but here encapsulated in Bewick’s words and pictures – ‘“the vast sweep of the Arctic Zone, and those forlorn regions of dreary space, – that reservoir of frost and snow, where firm fields of ice, the accumulation of centuries of winters, glazed in Alpine heights above heights”’. 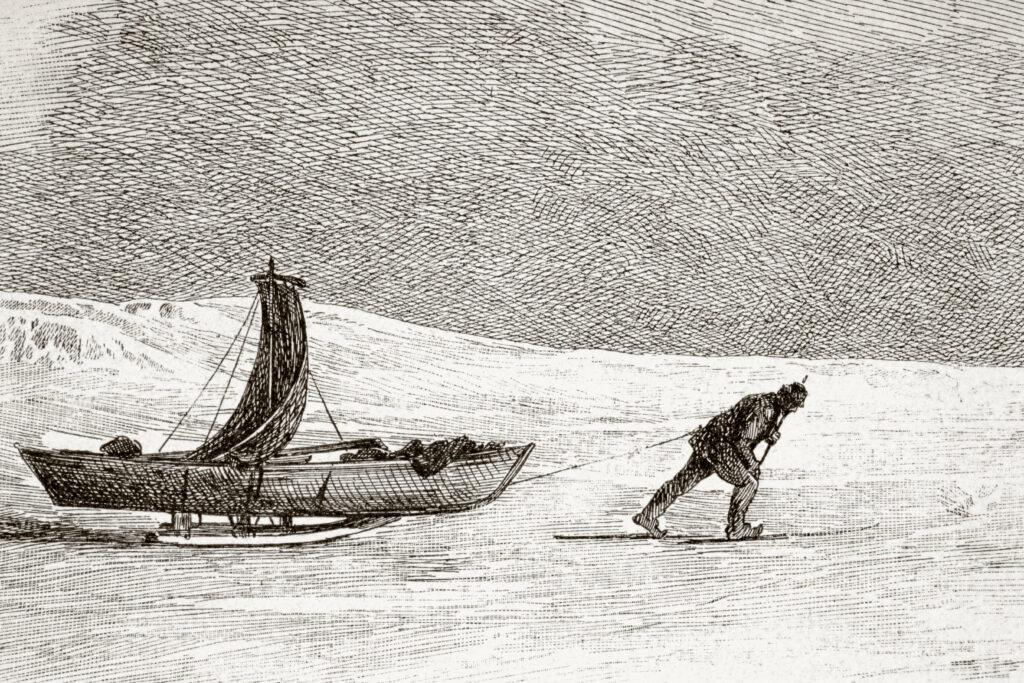 Nansen and Johansen at the North Pole

Bewick’s images penetrate Jane’s own imagination: ‘Of these death-white realms I formed an idea of my own’, and we see that they parallel her own inner solitude, as these early chapters develop.

Hardy is then drawing on the same Romantic tradition as Charlotte Brontë. But while that vein of metaphorical ice runs through both, Hardy’s writing has the unmistakable touch of modernity. His tragic hero is a working-class woman who has (as we would describe it now) been raped, has borne and buried an illegitimate child, has been rejected by her new husband when she reveals the foregoing events, and must now fend for herself by the labour of her hands and body, until, driven to extreme desperation, she murders the man who was the first cause of all her troubles. Writing this in 1891 was a brave act of the imagination; to then subtitle the novel ‘A Pure Woman’ was a gauntlet thrown down to Victorian morality. Hardy would certainly have agreed with Charlotte Brontë’s assertion (defending Jane) that ‘Conventionality is not morality’.[1] But Brontë couldn’t imagine her hero quite into those places where Tess is forced by circumstance (and the author) to go. Jane rejects Rochester’s plea to follow their passion and live together whatever society opines, and Rochester must be both unwifed and unmanned before Jane will rejoin him. Tess’s tragic struggle stems from a moment when she is not given the luxury of choice.

Tess of the D’Urbervilles is not, of course, all winter. The sunny, verdant, sensual days of Talbothays represent Tess’s first hopeful steps towards happiness, after burying her illegitimate child not long after she has given him a guileless, but in Church eyes also illegitimate, baptism. Three years have passed since her ignominious return to the family home – ‘silent, reconstructive years’, we are told. And so ‘On a thyme-scented, bird-hatching morning in May … she left her home for the second time’:

Her hopes mingled with the sunshine in an ideal photosphere which surrounded her as she bounded along against the soft south wind. She heard a pleasant voice in every breeze, and in every bird’s note seemed to lurk a joy.

Tess is still but twenty, and all her youthful optimism and energy is carried in that verb ‘bounded’. 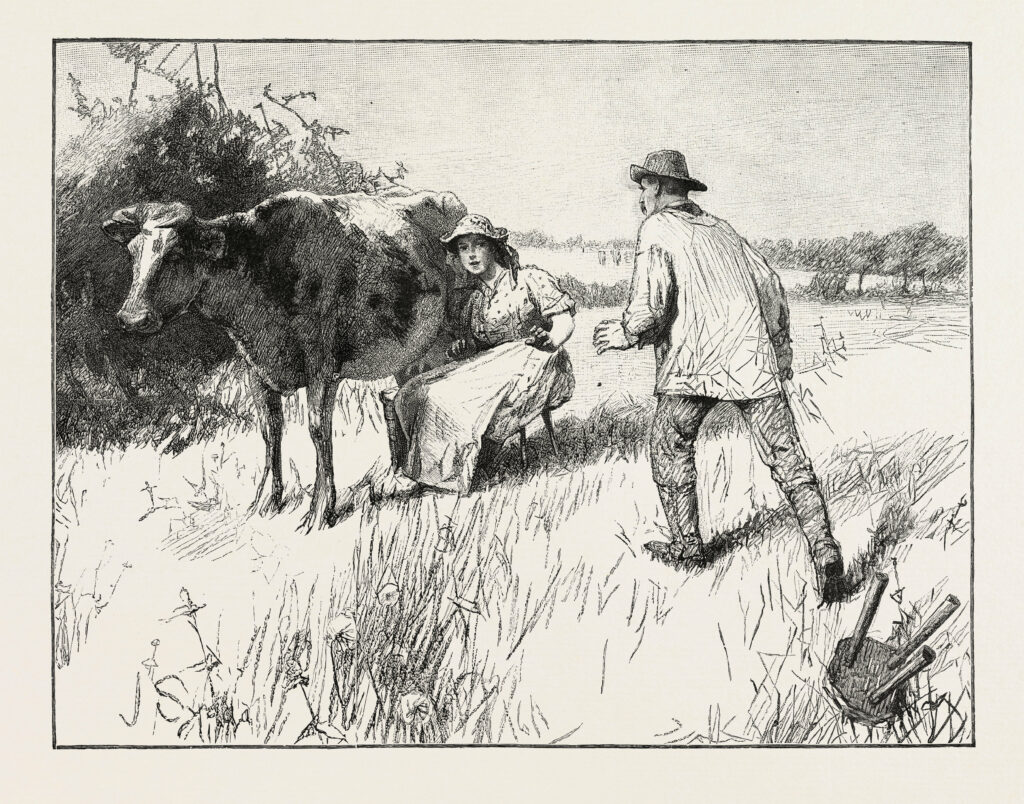 “He jumped up from his seat, and went quickly towards the desire of his eyes”

Sadly, with Hardy, hope always carries a hint of its opposite with it. Nonetheless, ‘Dairyman Crick’s generous household of maids and men lived on comfortably, placidly, even merrily’, and ‘Tess had never in her recent life been so happy as she was now’. Just as the elements are later to echo her distress, now they echo her vital spirit, and the genuine love between herself and Angel flourishes.  It is, I think, important to value this oasis in Tess’s story without seeing it as being marred by either what comes before or what comes after. As always, she tries to be her true self and thus feels the importance of telling Angel about her past, but through a combination of her own failure of nerve, his agency, and that of chance, she is stopped from revealing her story.

Another intersection to my thoughts about Hardy’s novel came when I went to a performance of Schubert’s Winterreise last week. https://arcana.fm/2022/12/11/clayton-golla-winters-journey/Composed in 1827 (20 years earlier than Jane Eyre, and 60-odd years before Tess), this is a work utterly embedded in the Romanticism I have noted in both Hardy’s and Brontë’s work. It is a song-cycle based on poems by Wilhelm Müller tracing the protagonist’s journey away from the loved one who has rejected him, as he trudges through the winter weather, deeper and deeper into despair. Each of the 24 songs marks a stage in his journey which begins in simple rejection but ends in existential angst. As with Tess, there are moments of hope in this journey, but they are instinct with bitterness or quickly negated. These green shoots, light, almost playful moments (emphasised in the piano part) in a relentlessly wintry work, only accentuate the emotion of the piece. Schubert’s wanderer is highly aware of his own tragedy in a way that Tess isn’t (which in fact makes her fate more moving). But I was moved by the similarities between the song ironically entitled ‘The Inn’ – which is in fact a graveyard – and the scene where Tess and her family, flitting to new lodgings which are no longer available, bed down above the vault of their D’Urberville ancestors, below the D’Urberville stained glass window. Perhaps the irony is too heavy here; Hardy can be guilty of that. But just as the wanderer wishes for a ‘room’ in the graveyard, so Tess bends down to the entrance to her ancestors’ vaults and cries, ‘“Why am I on the wrong side of this door!”’ Both are refused the oblivion they wish for, and, in Beckett fashion, can’t go on, but must.

Schubert’s is truly a winter’s tale; Hardy’s novel is not quite the same relentless descent into the abyss for Tess herself, as she is reunited with Angel in his full love and forgiveness. Yet for us as readers there is little consolation. We are told to accept Tess’s hapless end as though it were decreed – in Hardy’s words, ‘the President of the Immortals … had ended his sport with Tess’. Not full modernity then. But we must be thankful to Hardy for this early fictional representation of an ordinary woman who is also a tragic hero – one moreover whose tragedy can be expressed as well by her grubbing swedes in the icy rain as it can by her more florid symbolic sacrifice on the altar at Stonehenge.

The tenor in the Barbican performance of Der Winterreise was the remarkable Allan Clayton supported on piano by Kate Golla. Visual images were from the Australian painter Fred Williams. Twitter: @BarbicanCentre, @fatboyclayton.

I can also be found on Twitter, @minogue732. Be happy to hear from you!

[1] Brontë’s Preface to the second edition of Jane Eyre

Image 3 above: Nansen and Johansen use the wind to aid their progress while advancing across the ice in their attempt to reach the North pole Credit: Classic Image / Alamy Stock Photo

Image 4 above: “He jumped up from his seat, and went quickly towards the desire of his eyes” Credit: Artokoloro / Alamy Stock Photo