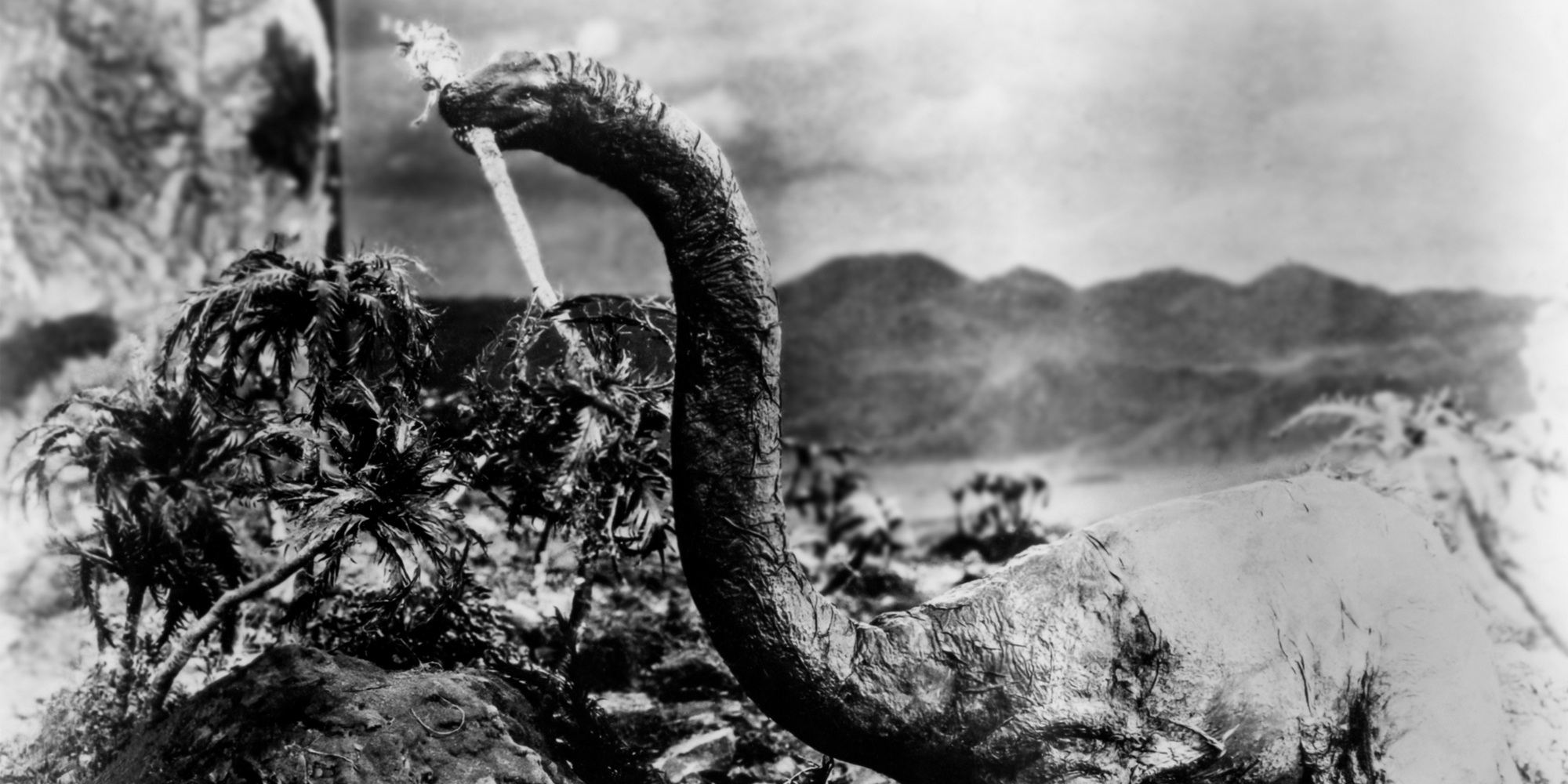 ‘The ordinary laws of adventure are suspended… Creatures survive which would otherwise disappear.’

In dedication to his novel, The Lost World, Arthur Conan Doyle wrote:

‘I have wrought my simple plan

If I give one hour of joy

To the boy who’s half a man,

This echoed H. Rider Haggard’s dedication to King Solomon’s Mines – ‘to all the big and little boys who read it’.

Doyle’s sentiments are most apt for this most exciting boy’s own tale which is a fine mixture of science fiction and rousing adventure. The author told his editor, ‘My ambition is to do for the boy’s book what Sherlock Holmes did for the detective tale.’ Anyone who had read this gripping novel would have to agree that Doyle achieved his ambition.

As with all such stories, the plot is both highly original and yet simple. A scientific expedition sets out to explore a mysterious plateau in South America that remains frozen in time from the days when dinosaurs roamed the earth. This lost world holds great danger for the explorers either from the terrifying prehistoric creatures or the fiendish ape-men who inhabit the plateau. The party is led by the irascible and larger-than-life character, Professor George Edward Challenger, one of Doyle’s most inspired creations. Challenger was based on a combination of two real persons: an explorer named Percy Fawcett, who was Conan Doyle’s friend, and William Rutherford, a professor of physiology who had lectured at the University of Edinburgh while Conan Doyle studied medicine there. Challenger is an imposing character: ‘It was his size, which took one’s breath away – his size and his imposing presence. His head was enormous, the largest I have ever seen upon a human being…. This and a bellowing, roaring, rumbling voice made up my first impression of the notorious Professor Challenger’.

The novel was originally published serially in the Strand Magazine during the months of April–November 1912. The story is narrated by Edward Malone, a newspaper reporter sent to interview Professor Challenger, who has already attacked four or five other journalists, to determine if his claims about his trip to South America are true. After assaulting Malone, who earns Challenger’s respect when the reporter refuses to press charges, the Professor reveals his discovery of dinosaurs in South America. Having been ridiculed for years, Challenger invites Malone on a trip to prove his story, along with the sceptical Professor Summerlee and the adventurer Lord John Roxton.

It is believed that in 1909 the discovery of fossil iguanodon footprints in a quarry near Conan Doyle’s Sussex home prompted the main idea for The Lost World. And indeed such a dinosaur features in the novel. Conan Doyle’s descriptions of the journey, the creatures and of the exotic flora and fauna are spellbinding. His depictions of the prehistoric beasts are detailed and remarkably accurate, bearing witness not only to Doyle’s meticulous research but his ability to create such vivid images on the page. The scene featuring the rookery of pterodactyls – ‘with hideous mothers brooding over their leathery, yellowish eggs’ – takes one’s breath away

There is also the superb and unexpected coda to the story when the ‘most horrible and loathsome’ pterodactyl, which Challenger has laboriously transported from South America manages to escape from an upper window when he proudly exhibits it at the Zoological Institute. This episode may well have inspired the climax of the movie King Kong (1933) with the giant ape loose in New York. So successful was the book that Doyle wrote two further novels featuring Challenger and his crew: The Poison Belt (1913) in which the Professor determined that the Earth was passing through a deadly interstellar cloud of ether; and The Land of Mist (1926), a story of the supernatural, reflecting the strong belief in Spiritualism that Conan Doyle developed later in life. Neither of these two novels was as successful or as interesting as The Lost World.

Although there had been examples of other ‘lost worlds’ in literature prior to the publication of this novel, Conan Doyle’s tale set the model for modern dinosaur fiction, both in literary and cinematic form. Author Michael Crichton paid tribute and homage to Doyle’s novel when the called his sequel to Jurassic Park by the same name. Indeed the Jurassic Park novels and movies are all extensions of Conan Doyle’s original masterpiece.

Doyle’s story has inspired many other literary lost world scenarios. For example, as early as 1916 Edgar Rice Burroughs published The Land That Time Forgot, which is his version of Doyle’s tale which concerns lost submariners from a German U-Boat who discover their own lost world of dinosaurs and ape-men in Antarctica.

So visually exciting is The Lost World that it was very quickly picked by the embryonic cinema industry; the first movie version appeared in 1925 with Wallace Beery as Challenger and featured the pioneering stop motion special effects by Willis O’Brien, which, interestingly enough, was a forerunner of his work on the original King Kong (1930). Doyle appeared in an introduction to the film. In 1998, this movie was deemed ‘culturally, historically or aesthetically significant’ by the Library of Congress and selected for preservation in the United States National Film Registry.

The story was given a De Luxe colour Cinemascope treatment in 1960 with veteran Hollywood actor Claude Rains in a bright ginger wig and beard as the intemperate Challenger. Since then there have been numerous radio versions as well as a TV series and a TV movie based, sometimes very loosely on Doyle’s text. Screenwriters cannot resist adding to the terrors on the lost plateau including giant spiders and insects. Another movie appeared in the cinemas in 1998 with Patrick Bergin as the Professor. Perhaps the most interesting variant on the original was the movie King of the Lost World (2005) which was in essence a blend of Doyle’s story and that of King Kong with a giant ape.

Doyle’s ground-breaking novel will continue to excite and entertain as long as we harbour a fascination with dinosaurs and unknown worlds. 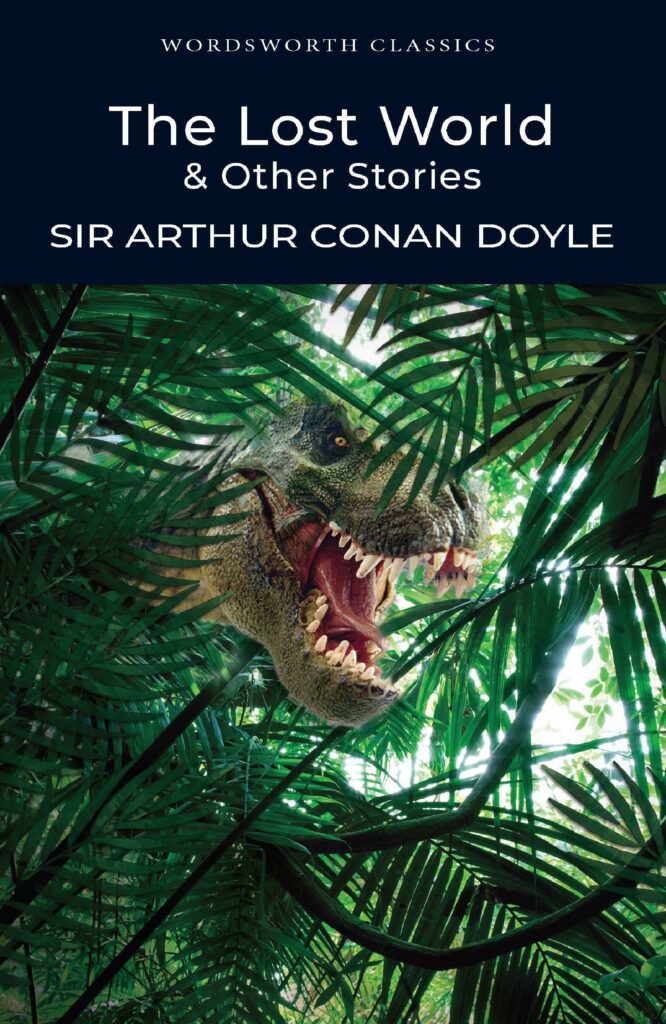 The Lost World & Other Stories