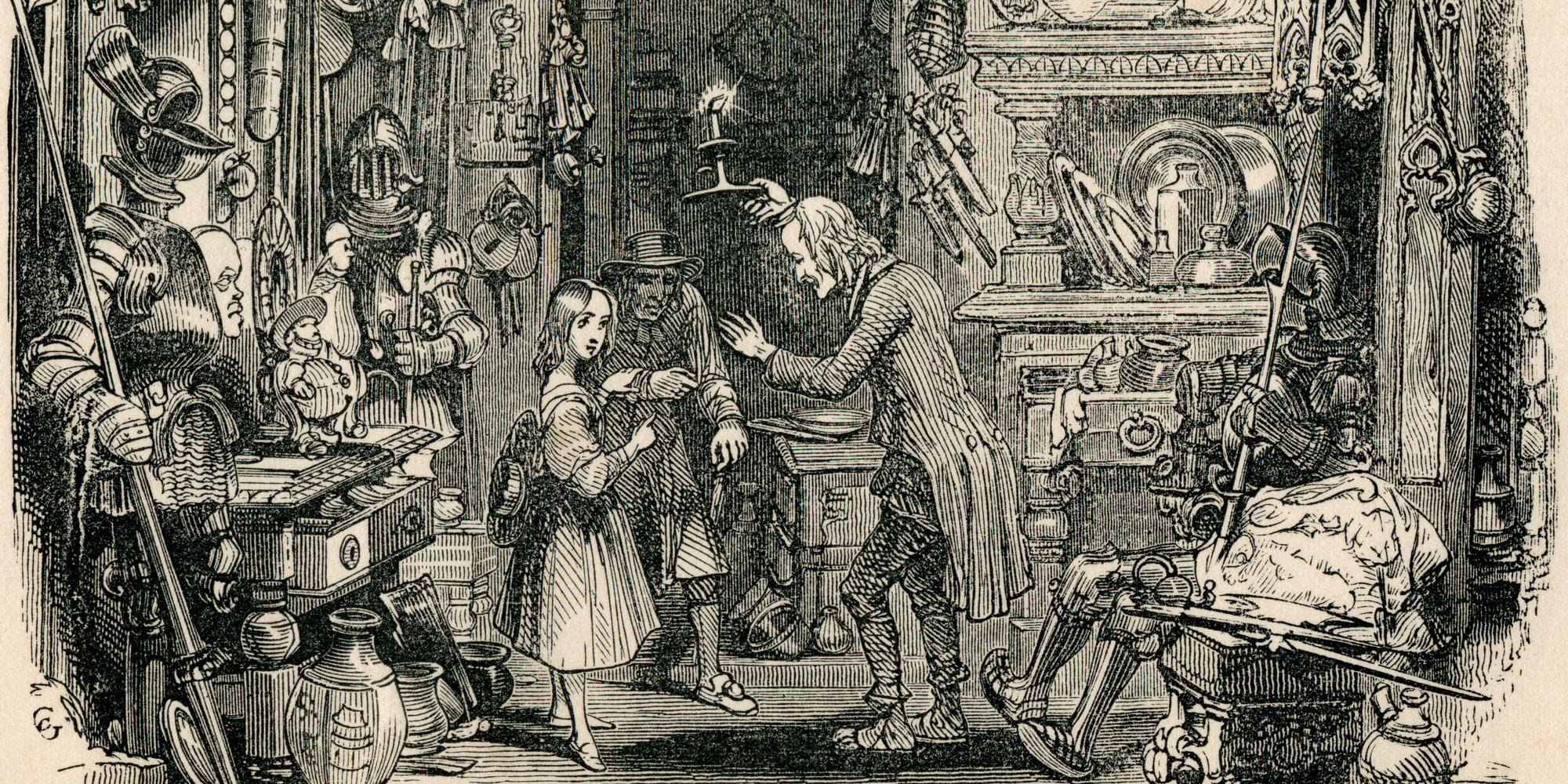 Two of the strongest elements found in the novels of Charles Dickens are the presentation of grotesque characters and significant doses of sentimentality. These two features are very well represented in The Old Curiosity Shop, a comparatively early work, published in 1840 when the author was just twenty-eight. The novel first appeared in serial form in the periodical Master Humphrey’s Clock. Dickens pioneered the serial publication of narrative fiction, which became a dominant and inexpensive method for first presenting novels to the reading public before they appeared in book form. The cliff-hanger endings of each episode kept the readers in suspense and ensured the purchase of the next issue. The instalment format enabled Dickens to evaluate the audience’s reaction to each episode and allowed him to modify his plot and character development based on such feedback. This helps to explain the wandering nature of the storyline.

In essence, the plot is a comparatively simple one, having elements found in Nicholas Nickleby: two individuals seeking shelter and salvation while encountering a gallery of colourful and often bizarre or comic individuals. The key characters in the novel are the angelic teenager Little Nell and her grandfather, Mr Trent, who live at the Old Curiosity Shop, and Christopher (Kit) Nubbles, a faithful friend of the couple. The old man is a chronic gambler and in order to pursue his addiction, he borrows money from Daniel Quilp, a vicious deformed dwarf – one of Dickens’ harshest villains. Trent’s attempt to gamble and amass some money for Nell’s future fails and so the old man and Nell run away.

On their adventures, the pair meet an extravagant cast of Dickens characters including Thomas Codlin and his travelling puppet show, Dick Swiveller, Sampson the lawyer and Mrs Jarley, owner of a Waxworks exhibition who employs them for a time. Nell and the old man suffer much misery and hardship, but through it all, the girl remains loyal and loving. Mr Marton, a kindly schoolmaster, takes pity on the distressed couple and provides lodgings for them near an old church where Nell tends the graves. Her health declines and her death provides one of Dickens’ most moving and sentimental scenes in all his fiction. In his Preface to the 1848 Cheap Edition, the author wrote:

‘I had it always in my fancy to surround the lonely figure of the child with grotesque and wild, but not impossible companions, and to gather about her innocent face and pure intentions, associates as strange and uncongenial as the grim objects that are about her bed when her history is first foreshadowed.’

It is said that the author was traumatized by the demise of Nell. As he was writing the novel he felt as though he were experiencing the death of one of his own children. It also brought back painful memories of the death of his sister-in-law, Mary Hogarth.

While contemporary readers shed tears along with the author at the passing of the sweet teenager, some years later Oscar Wilde observed: ‘One must have a heart of stone to read the death of Little Nell without laughing.’ Of course, the remark was designed to provoke a smile and demonstrate Wilde’s wit rather than be a cruel criticism. It is one of Wilde’s perfect epigrams which, it has to be said, always contain an ounce or two of truth. However, in later life when Charles Dickens took up his reading tours, his dramatic delivery of the death of Little Nell was a favourite and never failed to move an audience.

The excitement generated by the dramatic conclusion of the novel was remarkable. American readers were reported to have stormed the piers in New York, shouting to the sailors, who may have well read the final chapters in Britain, ‘Is Little Nell alive?’ This clamour for news of the young girl’s fate is indicative of the way the novel was taken to the heart of the reading public.

The fact that there have been numerous dramatic productions of the novel since its publication provides ample testimony to the book’s continuing popularity. In the early part of the twentieth century, there were two silent movies (1914 and 1921) and an opera, Nelly, composed in 1916. In 1934, a sound version was produced at Elstree Studios in Britain directed by Thomas Bentley who had also directed both of the earlier silents. Obviously a glutton for punishment! In this later production, the recreation of the grotesque elements in the narrative led the film to be regarded as an ‘expressionistic nightmare.’ There have been various television and radio adaptations of the story. The Disney studio brought it to the screen in 1995 with Peter Ustinov as the doddery grandfather and Tom Courtney as Quilp. Universal Pictures also turned out a version in 2007 with Derek Jacobi and Toby Jones in the same roles. Neither film made much of a ripple.

Perhaps the most unusual presentation of Dickens’ story was the musical film Quilp (aka Mr Quilp, 1975), an all-singing and all-dancing take on the story which focused on the villain rather than Little Nell and her grandfather. One reviewer observed it was a desperate attempt to replicate the success of Oliver, the musical based on Oliver Twist, but failed miserably. Quilp was played by Anthony Newley who also wrote the songs, mentioning ‘his old friend Fagin’ in one of the lyrics. The movie received mixed reviews. It was generally felt that it lacked the emotional power of the original storyline.

It has to be said that The Old Curiosity Shop is not the most cohesive of Dickens’ plots, but it contains fine, wonderfully realised episodes of drama and comedy. Despite its reputation for over-sentimentality, the book also includes realistic dark moments reflecting the author’s concern for the poor of his time.