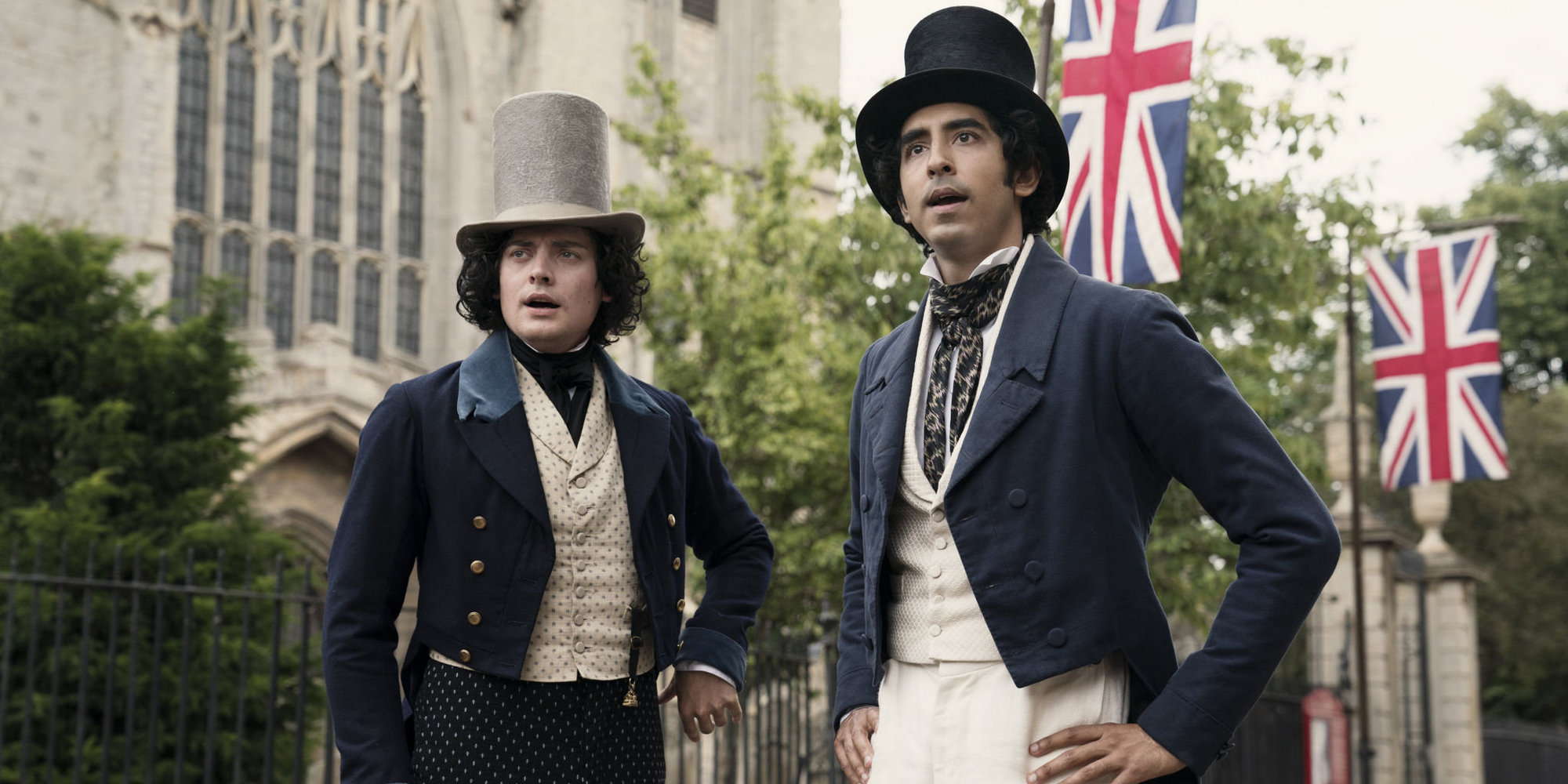 The Personal History of David Copperfield

David Copperfield is a joy. I speak of course of Armando Iannucci’s new film, not Charles Dickens’ novel on which it is based. One could never say of any serious novel that it is purely a joy, because that would be to ignore or downplay its tragic dimensions, its harshnesses, its complexities and nuances. This film does not ignore those dimensions and complications, indeed almost miraculously it preserves them and is (almost) true to them whilst still remaining, at its buoyant heart, playful, optimistic and, yes, joyful. It makes the imaginative delights of writing and reading fiction part of the film itself, playing with Dickens’ words in an innovative way, visually and as part of the story, so that they become part of the cinematic pleasure. So we get two David Copperfields in one. The film is framed by the figure of Dickens/Copperfield reading his story before a theatre audience, leading us into and out of the fictional narrative through a further fictional conceit in which the author and first-person character become one. Greta Gerwig’s Little Women attempts something similar, but her narrative frame seems heavy-handed, almost gauche beside Iannucci’s light touch. The director’s device is helped here by the fact that Dickens did famously perform his works, and David Copperfield is his most autobiographical novel. But clearly, too, Iannucci is just in love with the novel, and all his filmic imagination is in its service.

The central conceit that powers this is that, as the character of David Copperfield progresses, from earliest babyhood to mature adulthood, he is continually, and actually, writing his own story. This picks up from the novel, which has chapter headings such as ‘I Observe’, ‘I Make Another Beginning’. As a baby David hears and sees the mouthings of his mother and Peggotty, their baby language echoing his own (shades of the Joycean language of the first chapter of Portrait of the Artist here, as well as of the opening of Tristram Shandy). As he grows, characters, whether benevolent such as Peggotty, or nightmarishly fearsome such as Murdstone, enter and inhabit his life, and our cinematic world. And he is at the same time writing them, first in his head and then on scraps of paper. We hear their different cadences, manners of speech and dialects – then we hear David trying them out, repeating them, mimicking them, exaggerating them – and finally committing them to paper. In turn, these scraps of paper with their written words become part of the visual material of the film itself. And David is constantly encouraged in his quest to pin the world down in words by those characters who care for him and have his best interests at heart. I can’t remember another film about a writer that captures so well what the writing imagination is like – words first forming in the head, then being revised and reformed on the page, and, in the nineteenth-century world, the cursive pleasure of pen in hand, ink on paper.

Thus as we are flying along on David’s coattails in a fast-moving narrative, the words of the novel itself fly with us. And in the autobiographical sub-text, we see how, for Dickens, words must have transformed his lived reality into something that had its own power. He can rewrite his own story. The most poignant example of this in the film is when Dora, at her beloved Doady’s writerly – and impatient – elbow, holding his pens because it is the only useful thing she can do, sees that ‘I have no place here. I don’t belong’. David, intent on his writing, doesn’t contradict her, and, with more dignity and self-understanding than she is allowed in the novel itself, she instructs him sadly, ‘Write me out, Doady’. And he does.

This is one of the inspired imaginative leaps of the film. Instead of the novel’s sentimental death scene – for Dickens, writing out meant killing Dora off – here, in the magical world of the film narrative, Dora simply disappears. But she makes her own exit, commenting critically on her own disappearance while allowing Agnes to take her rightful place alongside David. There’s a darker story about Dickens’ own married life hidden here – or perhaps glancingly referred to. [For an excellent fictional re-telling of that story, see Gaynor Arnold’s Girl in a Blue Dress.] But generally, Dickens comes off far better than perhaps he should in this film. Blended with David, he is indeed ‘the hero of my own life’, and, with David, the hero of the film. And after all, he did make the whole thing possible.

Dev Patel’s gloriously life-affirming and engaging incarnation is crucial here, but he is preceded by the young Davy, enchantingly played by Ranveer Jaiswal, bursting with childhood joy. It’s in Jaiswal’s embodiment of David that the delight in language first comes to the fore, and the writer is born. The idyllic early scenes at Great Yarmouth give short shrift to the novel’s patronising tone and allow us to see a complete and happy world, encompassed in the upturned houseboat. Who amongst us would not love to live in such a place and life, born of labour and nature and naturally affectionate relations that have little to do with blood. In short, the opposite of what awaits David when he returns home, to meet the end of his childhood as the deadly hand of his new step-father, Mr Murdstone, comes down on him. That hand breaks gigantically, Monty Python-like, through whatever flimsy fourth-membrane is left in this utterly non-realist adaptation; it is the hand of Murdstone, the hand of fate, and the hand of the writer. Yet just as we enter into the comic-book territory, the real terrors of the story begin. We’re not spared the properly frightening beating Murdstone administers to David, nor the almost worse image of his mother left powerless outside the locked room. It doesn’t take much to imagine the nature of the relations between the hapless Clara and her new husband. ‘He beat me then as if he would have beaten me to death’, says David/Dickens in the novel. Watching the film, we believe it.

And I return here to the way this adaptation fully understands its subject. I’ve always had a problem with Dickens’ exaggerations and over-reachings, the way he reduces the darkest of situations to caricature and comedy, the deepest of feelings to sentimentality. But watching this version, I temporarily understood. Dickens/David/Dev Patel (for he is part of the story too) is shown in the process of that exaggeration, born of the intense desire to get down – on paper, in voice, on film – the unique characterizing quality of each individual’s speech and behaviour, the sheer extraordinariness and variety of what it means to be human. David, to entertain Steerforth and his crew, mimics the characters in his life, and in doing so he sometimes belittles those who are most beloved. As part of this, he sometimes edits himself, in particular with Steerforth, who is his real weakness, the self he would like to be, and the one he always seeks to please. But finally, he reproduces the ways and manners of speech of all those he encounters as an act of love, at the same time discovering his own and proper self.

Steerforth, like Dickens himself, is let off somewhat lightly in this film. Emily’s defection is played pianissimo, whereas in the novel it is the grim comeuppance of David’s careless affection for Steerforth, for which he betrays those who are most fully a family to him. He brings the serpent into their midst. And in the novel, the earlier horrors of the bottling factory are not those physically displayed in the film, but rather the darker inner hurts of shame, ignominy and defeated ambition. Yet if the novel’s dark side is underplayed, its soft-eyed qualities of sentimentality are hardened up. Mr Micawber, who constantly gets away with it in the novel, is shown for what he is, a feckless husband and father with an eye to the main chance. Conversely, Mrs Steerforth’s cruel snobbery is quite undermined by her hopeless grief at her son’s death. There’s a general balancing out: instead of caricatured stereotypes, we find individuals whose foibles we understand. Mr Dick’s feyness, which might seem simply silly on the page, is elevated into the distress of mind which is at once explicated and soothed by the boy David. In what hardly seems like acting, Hugh Laurie gives a superbly gentle and touching performance as Mr Dick. And the ultimate refusal of sentimentality is in the portrayal of Dora, cleverly twinned with David’s mother Clara through the casting of the same actor (Morfydd Clark) for both parts. Thus we see David replicating his love for his child-like mother in his infatuation with the guileless Dora – and on the brink of repeating Murdstone’s cruelty to her. Clark as Dora gives us another deeply affecting performance, full of innocent silliness and stupidity until she wakes up to the fact that her child-wife self won’t, can’t, feature in the future pages where her husband writes himself a new life.

Acting and actors seemed particularly important in this film, at the heart of which is Iannucci’s ‘inclusive casting’. This isn’t just colour-blind, it’s colour-saturated, full-blooded rainbow diversity casting, a topsy-turvy Bakhtinian celebration of life in all its extraordinariness. No point in objecting to some inconsistency here, some familial or genetic irrationality there. None of it matters, as individuals are both fully themselves and linked together with others by human sympathy or by the sheer melée of existence in which they find themselves cheek by jowl. As David is given many names – David, Davy, Master Copperfield, Daisy, Trotwood, Doady – so his world is peopled by many beings, seen in different lights and from different angles. This wild multiplicity is intensely Dickensian and actually works better on the 21st-century screen than it does within the strictures of the 19th-century novel. And there’s something intensely moving about the ties of the blood being so overtly abandoned that distinctions are elided rather than accentuated. We feel, paradoxically, the human ties that bind us rather than those that separate us. The other becomes ourselves.

Well, I don’t want to get too serious; happiness is at the heart of this film, and for once, it is deserved.

In my next blog I’ll be looking at David Copperfield, the novel on which the film is based, available from Wordsworth Editions, as are the novels I mentioned above:

James Joyce: Portrait of the Artist as a Young Man

Gaynor Arnold: Girl in a Blue Dress was originally published by Tindal Street Press, 2008, then in paperback, by Allen and Unwin, 2009.

Mark Kermode’s comprehensive and insightful review of the film can be found on The Guardian website, or on Twitter @KermodeMovie where there is a link to his YouTube review. See Twitter also @copperfieldfilm, @Aiannucci, @simonblackwell. And @minogue732.

Image: Aneurin Barnard and Dev Patel in ‘The Personal History of David Copperfield’