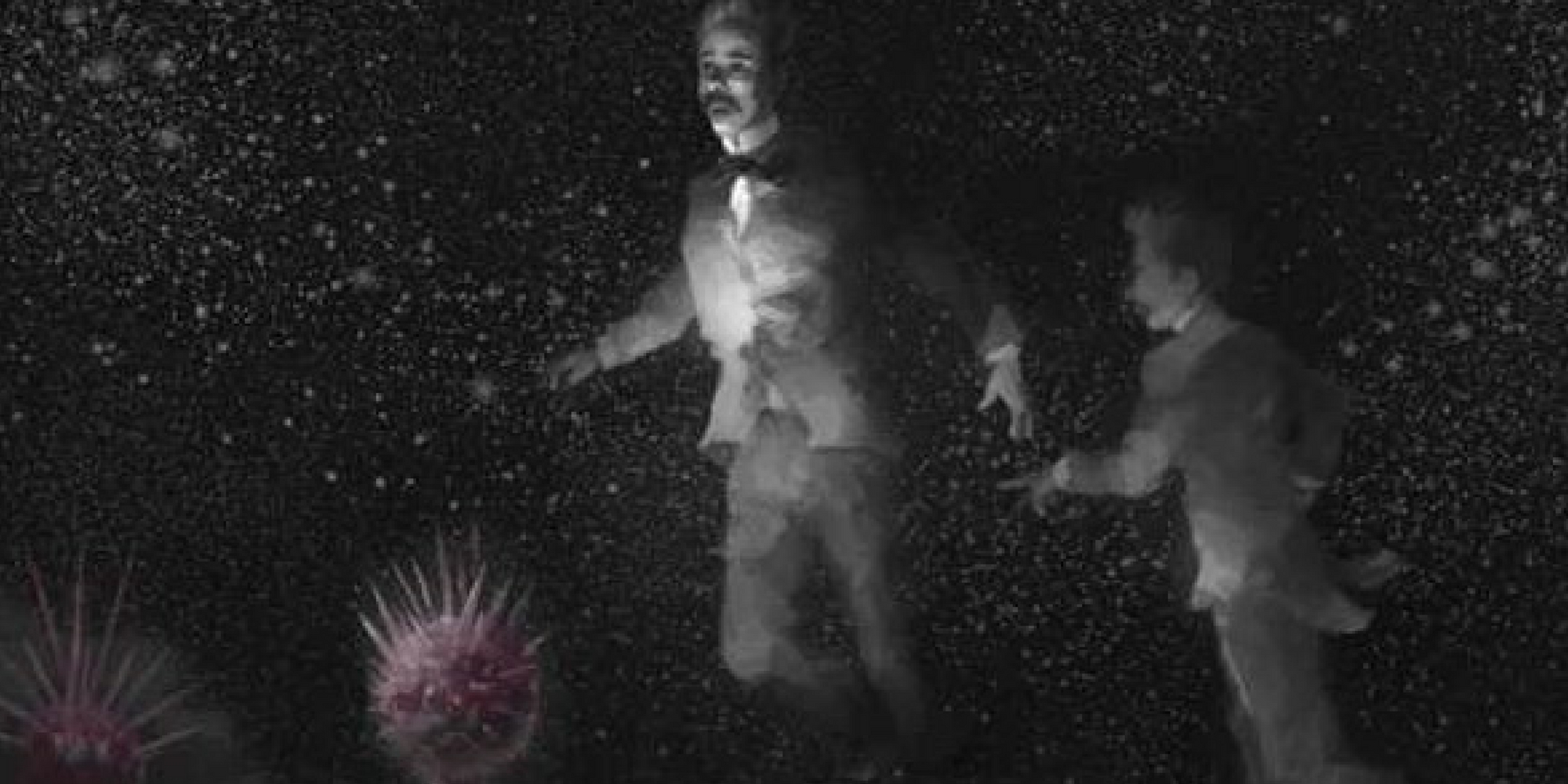 It took moviemakers quite some time until they got around to filming this, the most spectacular of Wells ‘scientific romances’.  But before then, a radio adaptation had received spectacular notoriety.  The War of the Worlds was an episode of the American radio drama anthology series The Mercury Theatre on the Air. It was performed as a Halloween episode on Sunday 30 October 1938 and aired over the Columbia Broadcasting System. The first two-thirds of the one-hour broadcast was presented as a series of simulated news bulletins, which suggested an actual alien invasion by Martians was currently in progress. Popular legend holds that some of the radio audience tuned in late thereby missing the clear introduction that the show was a drama. As a result, the programme, directed and narrated by actor and future filmmaker Orson Welles, became famous for allegedly causing mass panic. How true this is, is now difficult to determine, but nevertheless, the broadcast has achieved a kind of legendary status.

It was in 1953 that Paramount pictures produced the first film adaptation of the story, a highly polished technicolour version. However, it was an updated retelling, changing the setting from Victorian  England to modern-day California. Also, in keeping with so many science fiction films of the time which involved invaders from other worlds, it acted as a commentary on the current ongoing Cold War and the nuclear arms race. Earth is suddenly and unexpectedly invaded by Martians and American scientist Clayton Forrester (Gene Barry) searches for any weakness that can stop them in their plan for world domination.

The film opens with a black-and-white prologue featuring newsreel war footage and a voice-over describing the destructive technological advancements of Earthly warfare from World War I through World War II. The story then begins with a series of colour matte paintings depicting the planets of our Solar System as the narrator (Sir Cedric Hardwicke) offers a tour of the hostile environment of each world, eventually explaining to the audience why the Martians find our lush, green and blue Earth the only world worthy of their scrutiny and coming invasion. Director George Pal originally planned for the final third of the film to be shot in the new 3D process to visually enhance the Martians’ attack on Los Angeles. However, the plan was dropped prior to the start of shooting presumably because it was deemed too expensive. This movie is considered to be one of the great science fiction films of the 1950s.

A second version was produced in 2004 as a vehicle for Tom Cruise. Again the story was set in modern-day America and apart from the fact that the Earth was invaded by aliens from Mars, there was little of Wells’ narrative in the screenplay. The movie, directed by Stephen Spielberg, was described as an anti-war film as civilians run and only try to save themselves and their families rather than fighting back against the Martian Tripods. The film was well received and was a smash hit at the box office.

Wells’ odd little novella, The First Men in The Moon tells the story of a journey to the moon undertaken by the two protagonists, a businessman narrator, Bedford, and an eccentric scientist, Cavor. On landing, they discover that the moon is inhabited by a sophisticated extraterrestrial civilization of insect-like creatures which they name ‘Selenites’. It was given a comedic treatment in a 1964 movie starring Edward Judd and Lionel Jeffries as the astronauts. However, the screenplay eliminated all the philosophical elements concerning the stratified society of the Selenites and the rigid roles that their regime imposes upon them. A more faithful adaptation of the story reached the television screens in 2010. It was scripted by Mark Gatiss, who starred as Cavor with Roy Kinnear as Bedford. The film had a neat framing device which was set on the day of the Apollo 11 moon landing, 20 July 1969. In fact, the final shot reveals a Selenite observing the Apollo craft touching down on the moon’s surface. The film ends with a tribute to Lionel Jeffries, who played Cavor in the 1964 film and who died in 2010.

I cannot leave the subject of Wells’ science fiction films without mention of Things to Come. The script for the movie was a reworking by the author of his novella The Shape of Things to Come (1933). The film opens in Everytown in 1940 when the country is on the brink of war and we follow the history of this town and its inhabitants (as representatives of all mankind) through various conflicts, social upheavals and scientific advances. We move through the 1960s and 70s until we reach 2036, when humans live in huge underground cities, including the new Everytown. At this time, there is to be the first manned flight to the moon and as it roars off into the huge night sky, the scientist responsible for its construction delivers a stirring philosophical monologue about what is to come for mankind. He speaks passionately about progress and humanity’s unending quest for knowledge and advancement as it journeys out into the immensity of space to conquer the stars and beyond. He concludes with two rhetorical questions, which in many ways sums up Wells’ own concerns regarding society and its future: ‘All the universe or nothingness? Which shall it be? Which shall it be? …’