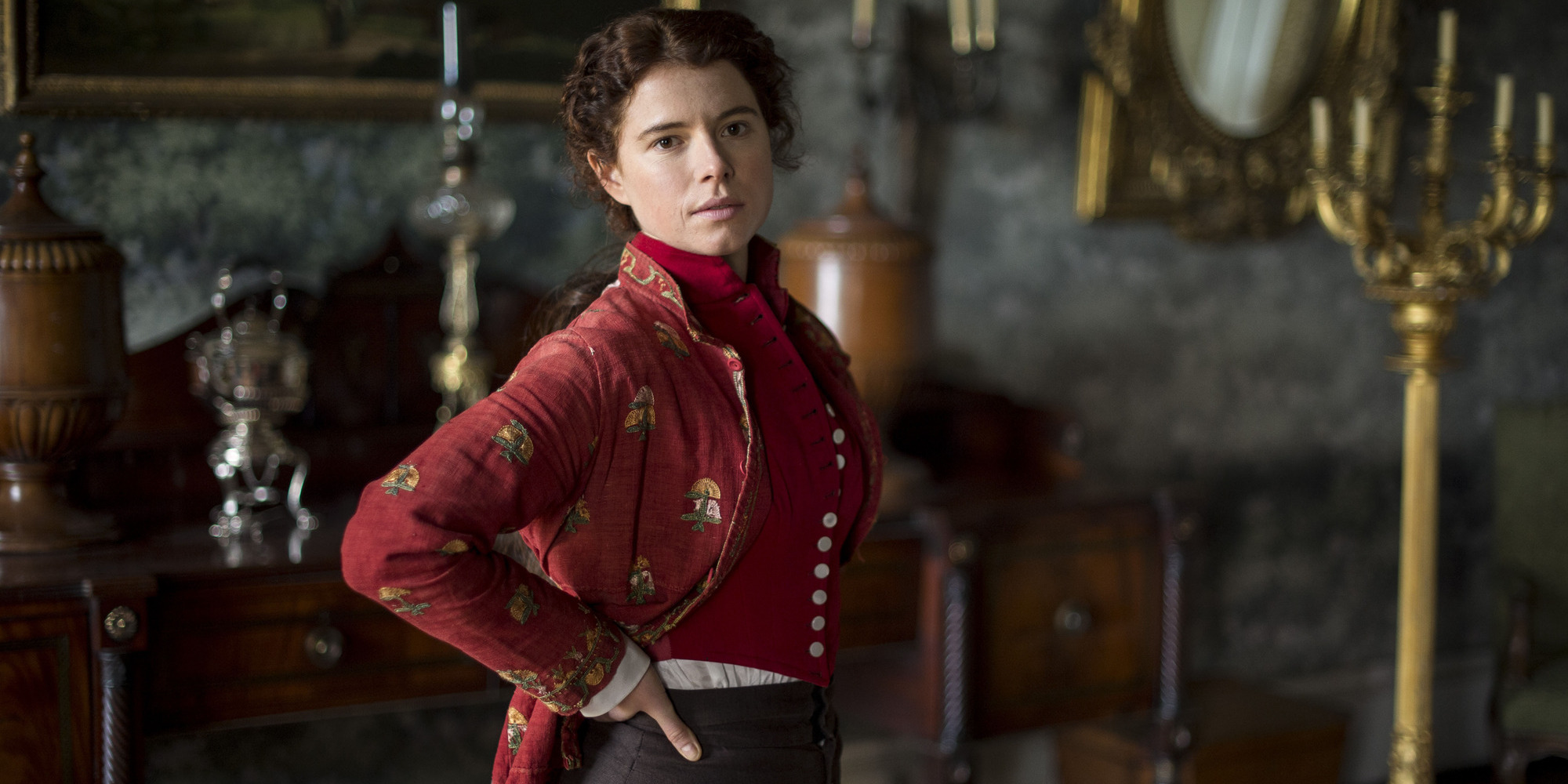 The Woman in White – a last word

The lady was not ugly! Sally Minogue suggests that the BBC adaptation of ‘The Woman in White’ missed a few tricks by not trusting to Wilkie Collins’ word.

A key dramatic moment in the novel The Woman in White is Walter Hartright’s first meeting with Marian Halcombe, one of the most interesting female characters in nineteenth-century fiction. It occurs in Walter’s first narrative, early on in the novel, when he goes as the art tutor to the two half-sisters Marian and Laura at Limmeridge House:

I looked from the table to the window farthest from me and saw a lady standing at it, with her back turned towards me. The instant my eyes rested on her, I was struck by the rare beauty of her form, and by the unaffected grace of her attitude. Her figure was tall but not too tall; comely and well-developed but not fat; her head set on her shoulders with an easy, pliant firmness; her waist … visibly and delightfully undeformed by stays.

So far, so accurate to Marian as played by the striking Jessie Buckley, and on the page, Walter permits himself the pleasure of observing Marian for a few moments without alerting her to his presence. When he does so, and she immediately moves towards him, he is ‘in a flutter of expectation to see her face clearly’:

The erotic charge of the passage pulls up short in a moment of deliberate narrative bathos which also announces a significant moment in Victorian fiction: the creation of a heroine who can be ugly but also profoundly attractive, and an agent of power rather than a passive recipient of the agency of others. For so Marian continues to be, overturning standard female stereotypes to which her half-sister Laura fully conforms. If Walter’s attraction to her is sidelined by her being ‘ugly’, Collins here is surely making some fun of the predictability of his male protagonist, drawn more readily to the fair but anodyne charms of Laura. Yet all his meaningful interactions are with Marian – with her he is on equal terms, discussing what should be done, often deferring to her judgement; and the novel ends with their remaining a ménage a trois, if a platonic one, with Anne as a sort of child-woman whom they both protect like any parents.

In addition, all the drama of that first meeting between Marian and Walter, which could have been exploited so interestingly in the television medium, is sacrificed to the decision to start the whole series in flashback. Thus we have already met Marian recounting her story to a lawyer in the opening moments of the drama before we ever meet her in her original narrative moment. The viewer’s first sight of Marian is at the very start of the drama, full face, in her mourning veil (mourning for whom we don’t yet know), her splendid dark eyes liquid with tears – quite the opposite of ‘ugly’.

I can see that casting an ‘ugly’ actor might have its difficulties, and perhaps there was pulling away from the judgement implied in that word. But that judgement itself is consistently overturned throughout the novel as the reader becomes deeply engaged by Marian’s strong personality. And within the realist frame of the fiction, we also see Count Fosco strongly attracted to her; the one weakness he concedes in his concluding account of events has been his instinct to preserve her. She in turn fully admits, if in the privacy of her journal, her unaccountable submission to this man:

I am almost afraid to confess it, even to these secret pages. The man has interested me, has attracted me, has forced me to like him … – and how he has worked the miracle, is more than I can tell.

Now we certainly would not consider it miraculous if we found ourselves ready to be tamed by the ludicrously handsome Riccardo Scamarcio, allotted to play Fosco in the adaptation. But this Fosco was surely a traducement of Collins’ creation, a man who is, we are told several times, ‘monstrously fat’ and whose closest companions are the family of white mice who ‘crawl all over him, popping in and out of his waistcoat’, while his pet cockatoo ‘hops onto his knee, and claws its way up his great big body, and rubs its top-knot against his sallow double chin in the most caressing manner imaginable’. Again Collins seems to be almost parodically testing the reader’s belief in such an ostensibly cartoonish character. But in spite of the fact that Marian avers ‘I have always especially disliked corpulent humanity’, there is a more true desire in her relations with Fosco than any to be felt between Walter and Laura. The subtlety of that was lost in the frank embraces between Fosco and Marian in the adaptation’s third episode, but I suppose every Sunday night period drama has to have its wet shirt moment.

Marian and Fosco recognise each other as worthy antagonists, and part of the originality of this novel is that Collins doesn’t hang back from exploring the often uneasy relationship between sexual desire and power. Sir Percival Glyde is a too-obvious villain in this respect, throwing his weight about, literally, to subdue the frail Laura. He is a blunt instrument, while Fosco is suave and soft in the way he bends his will to subdue others. Yet, as Marian brilliantly observes of his relationship to his wife, ‘The rod of iron with which he rules her never appears in company – it is a private rod, and is always kept upstairs.’ If there is any double-entendre here, it makes Collins’ observations of hidden abuse all the more acute and chilling. The point is that it is key to the unexpectedness of Fosco’s sinister power that he is such a strange physical specimen, with elements of the feminine about his make-up, just as Marian has elements of the masculine. To render him as a smouldering Latin lover is to make him less rather than more fearful.

Where Carl Tibbets’ direction did get it right, whilst departing from the text, was in depicting Marian as a cross-dressing, almost cross-gender figure. The costume department had a whale of a time with her culottes and her handsome jackets, cutting a colourful swathe as she strode across drawing room and moorland alike (while poor old Laura and her alter-ego Anne were stuck with diaphanous white). Vita Sackville-West would have given her eye teeth for some of those outfits. The only basis for this in the text is that already-quoted mention of Marian’s not wearing ‘stays’, and her thrilling venture out on the lead roof of the verandah to eavesdrop on Fosco and Glyde on the terrace below. Even then, she doesn’t don a male costume but does dispense with ‘the white and cumbersome parts of my underclothing’, wrapping herself about instead in a thick cloak. Give or take the slight frisson in the prose here, what this passage does make clear is the way her change of dress liberates her: ‘In my ordinary evening costume, I took up the room of three men at least. In my present dress, when it was held close about me, no man could have passed through the narrowest spaces more easily than I.’ So the adaptors were quite right to make Marian’s a trouser role, in this respect at least true to the spirit of the book by not following the letter – and visually pleasurable television to boot. 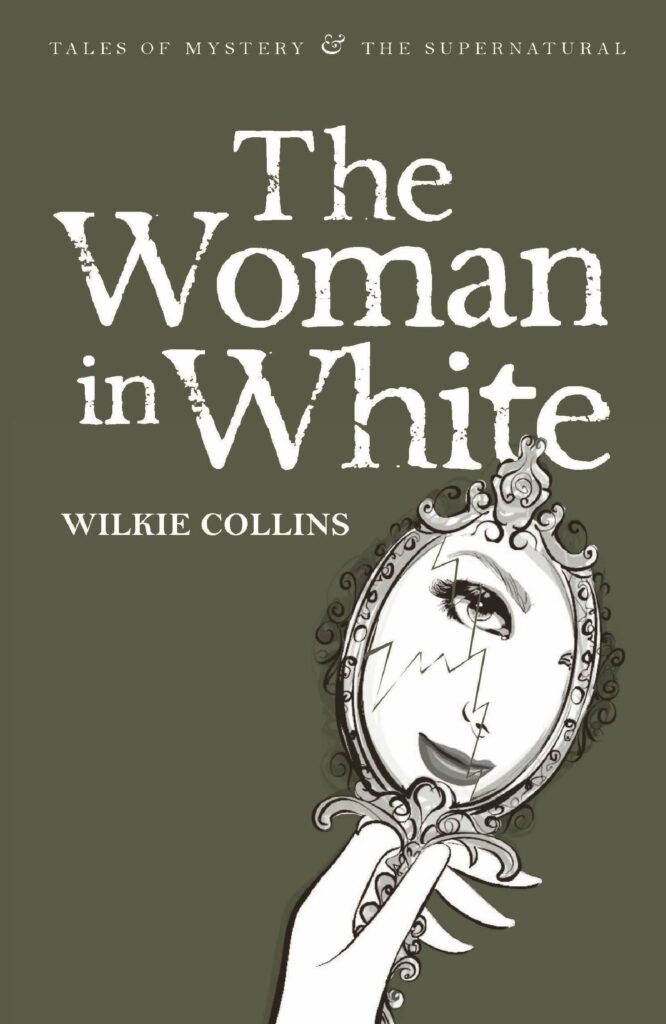