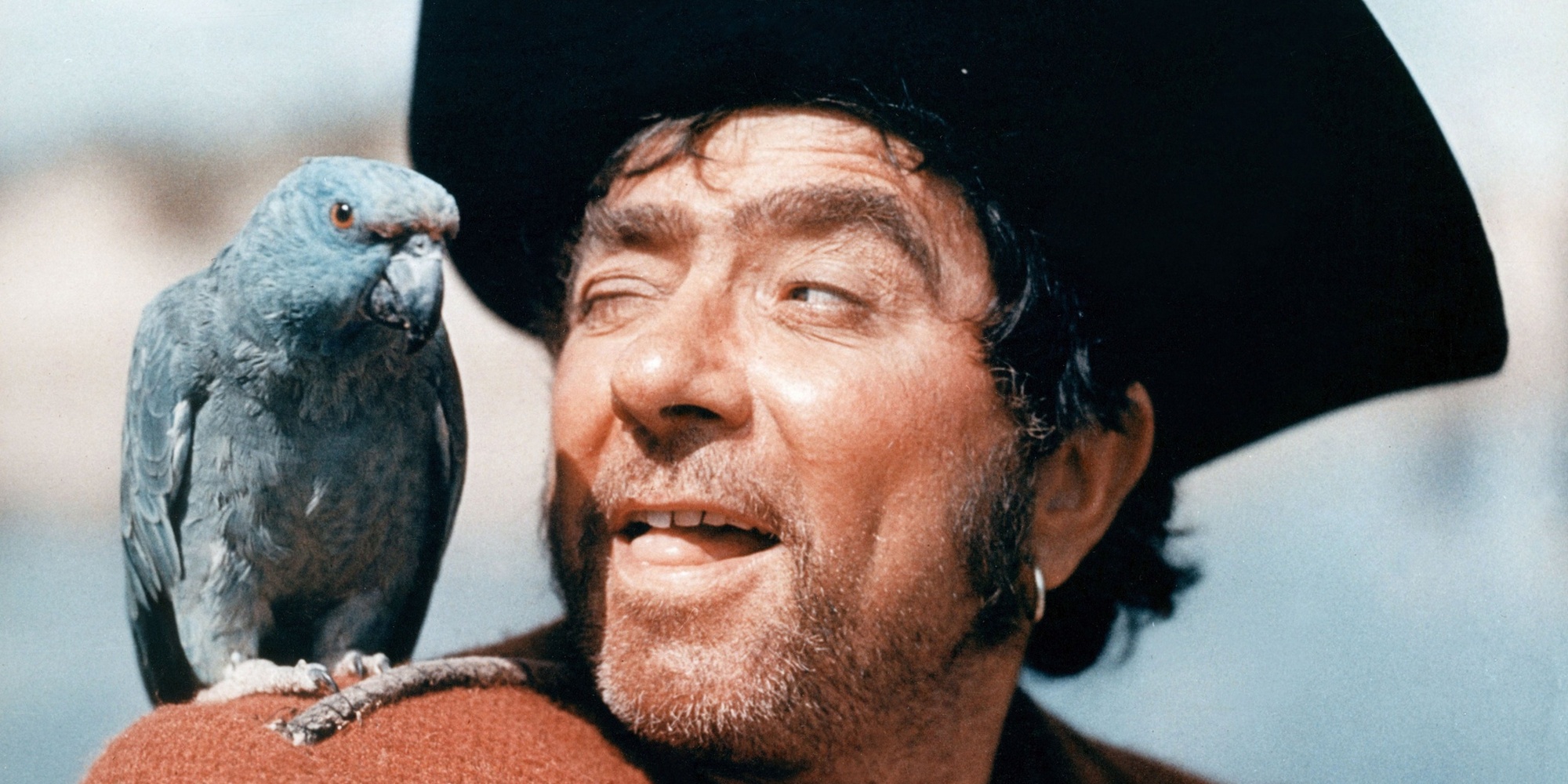 Treasure Island by Robert Louis Stevenson is the seminal pirates and buried treasure novel which is so brilliantly concocted that it appeals to readers both young and old. Stevenson claimed that the idea for the novel came to him when he drew a treasure map and labelled it ‘Treasure Island’. When he looked at the map the characters came to life for him, and their adventures formed themselves in his mind. The story was originally serialised in the children’s magazine Young Folks from 1881 to 1882 under the title Treasure Island, or the Mutiny of the Hispaniola, credited to the pseudonym ‘Captain George North’. It was first published as a book with Stevenson’s name on it in November 1883, by Cassell & Co.

The story is told in the first person by Jim Hawkins, whose mother kept the Admiral Benbow Inn which is visited by an old sea dog, intending to finish his life there. He hires Jim to keep a watch out for other sailors whom he fears, but despite all precautions, his is found and served with the black spot which means death. Jim and his mother barely escape with their lives when Blind Pew, Black Dog and other pirates descend upon the inn in search of the sea dog’s papers. Jim manages to retrieve a packet from the sailor’s belongings to square the fellow’s debt. He discovers that it contains a map showing the location of the buried treasure of the notorious pirate, Captain Flint. Jim, Doctor Livesey and Squire Trelawney fit out a ship and set sail to find the treasure. However, amongst the hired hands is the one-legged Long John Silver who, with the assistance of a number of his confederates on board, has designs on the treasure for himself. Jim, hidden in an apple barrel, overhears the plans for the crew to mutiny and he warns his comrades. The battle between Jim’s party and the pirates is an exciting and a bloody one, taking place on board ship and the island. There are more surprises and adventures in store for Jim before the climax of this highly entertaining novel.

By using a young boy as narrator, Stevenson is able to relate the story in simple classic prose, clear and direct which has made the author such a successful storyteller. Of course, the most remarkable character to emerge from the novel is Long John Silver who has become the archetype for all roguish buccaneers in literature. He masquerades as the cook on the voyage to Treasure Island but is the secret ringleader of the pirate band. His physical and emotional strength is impressive. Silver is deceitful and disloyal, greedy and visceral, and does not care about human relations. Yet he is always kind toward Jim and genuinely fond of the boy. Silver is a powerful mixture of charisma and self-destructiveness, individualism and recklessness. According to Stevenson’s letters, the idea for the character of Long John Silver was inspired by his real-life friend William Henley, a writer and editor. Stevenson’s stepson, Lloyd Osbourne, described Henley as ‘…a great, glowing, massive-shouldered fellow with a big red beard and a crutch; jovial, astoundingly clever, and with a laugh that rolled like music; he had an unimaginable fire and vitality; he swept one off one’s feet’. In a letter to Henley after the publication of Treasure Island Stevenson wrote: “I will now make a confession. It was the sight of your maimed strength and masterfulness that begot Long John Silver…the idea of the maimed man, ruling and dreaded by the sound, was entirely taken from you.’ Silver has a parrot, named Captain Flint after his former captain. The bird perches on Silver’s shoulder, and chatters piratical utterances such as ‘Pieces of Eight’. Silver uses the parrot as another means of gaining Jim’s trust, by telling the boy all manner of exciting and most likely invented stories about the parrot’s buccaneer history.

The novel was an immediate success for Stevenson who admitted that he had consciously borrowed material from previous authors. In a letter dated 1884 he wrote: ‘Treasure Island came out of Kingsley’s At Last, where I got the Dead Man’s Chest—and that was the seed—and out of the great Captain Johnson’s History of the Notorious Pirates.’ Stevenson also admitted that he took the idea of Captain Flint’s skeleton from Poe’s ‘The Gold-Bug,’ and he constructed Billy Bones’ history from the pages of Washington Irving, one of his favourite writers.

The first movie of the book was produced in 1918. Since then there have been numerous film, TV and theatrical productions of the tale, with the role of the one-legged villain, Silver attracting a legion of famous actors. Possibly the most notable was Robert Newton, with his rich burr and squint-eyed expression he made the part his own in two movies, Treasure Island (1950) and Long John Silver (1954) and a television series The Adventures of Long John Silver (1955). Other cinematic Silvers have included Orson Welles, Charlton Heston, Eddie Izzard and Tim Curry (with Kermit the Frog as Captain Smollett in the Muppet Treasure Island (1996)).

In the 1950s, there was an annual production of the musical Treasure Island, based on a book by Bernard Miles and Josephine Wilson. The music was by Cyril Ornadel and the lyrics by Hal Shaper. The musical was performed at the Mermaid Theatre, originally under the direction of Bernard Miles, who also played Long John Silver.

Because of the exciting nature of the story and its array of colourful characters, Treasure Island has also become a popular plot and setting for a traditional pantomime where Mrs Hawkins, Jim’s mother emerges as the dame.

The continuing fascination with this tale of high drama, buried treasure and treachery bears out what Stevenson wrote about the book to his friend W. E. Henley: ‘if this don’t fetch the kids, why, they have gone rotten since my day.’ Well, the book not only continues to ‘fetch the kids’ but the grown-ups too – in fact, all those with the spirit of adventure in their hearts. 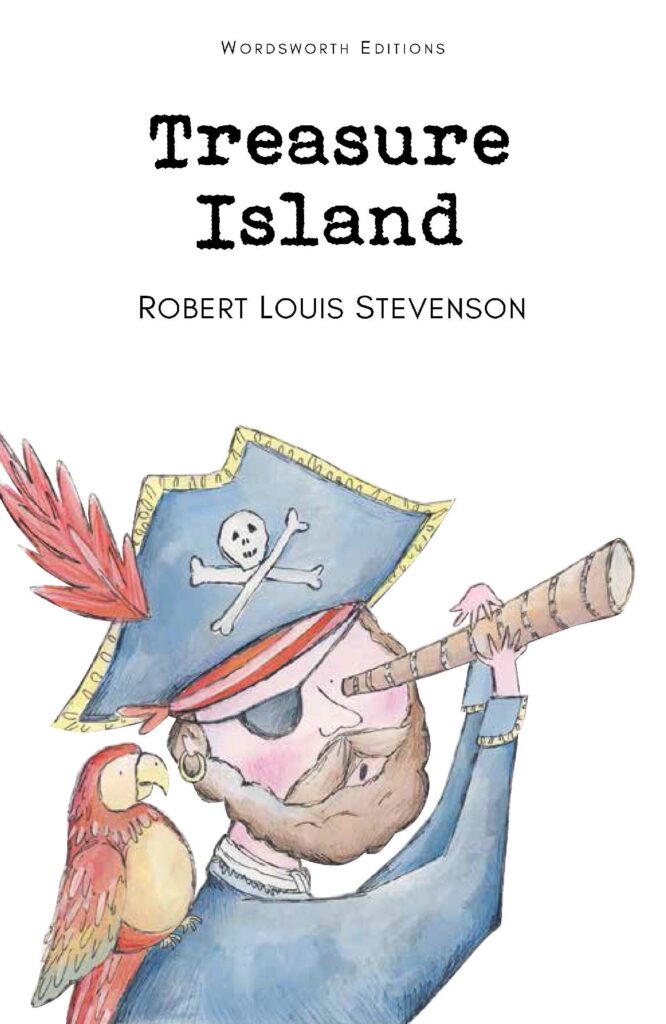 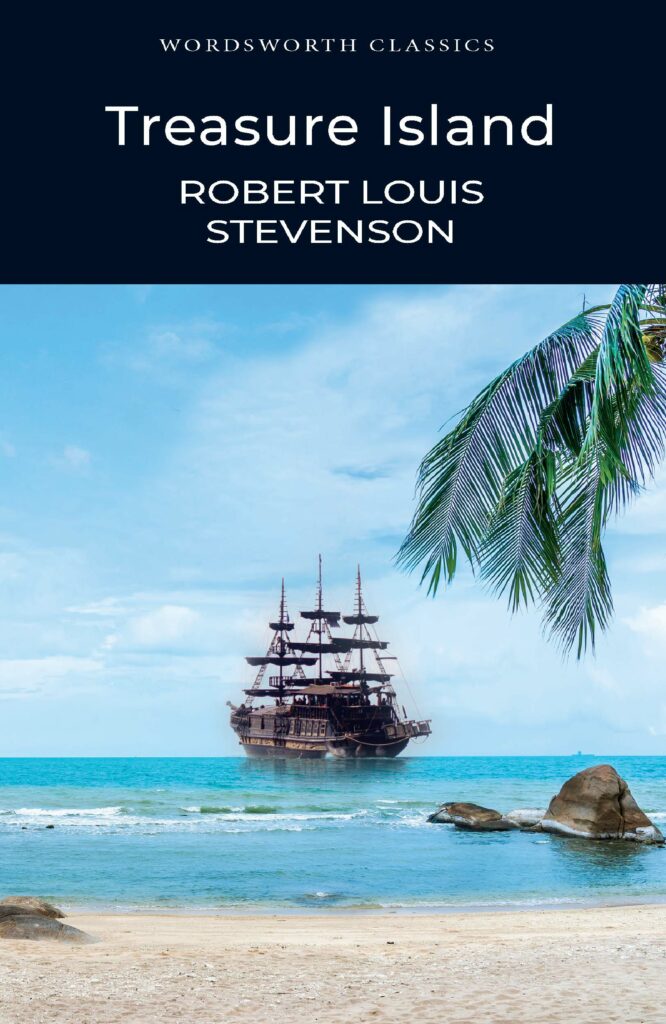 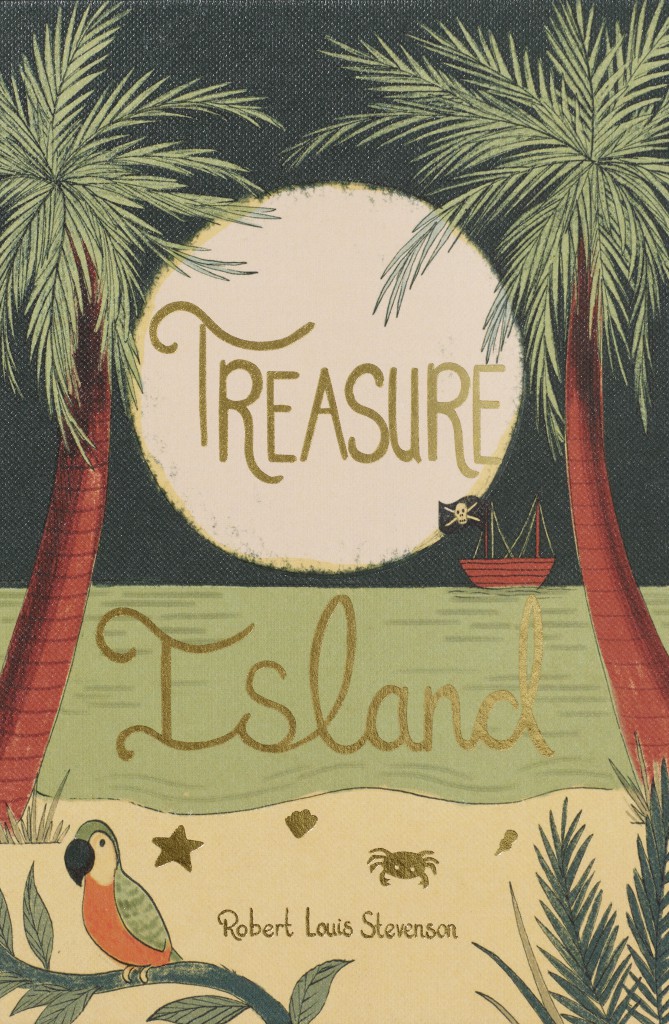 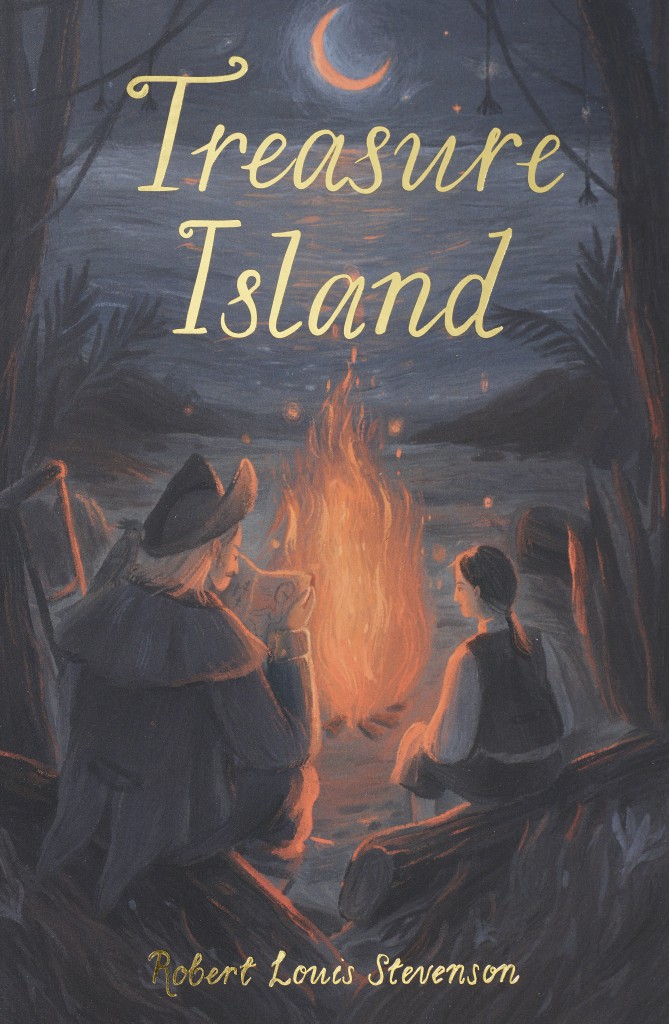 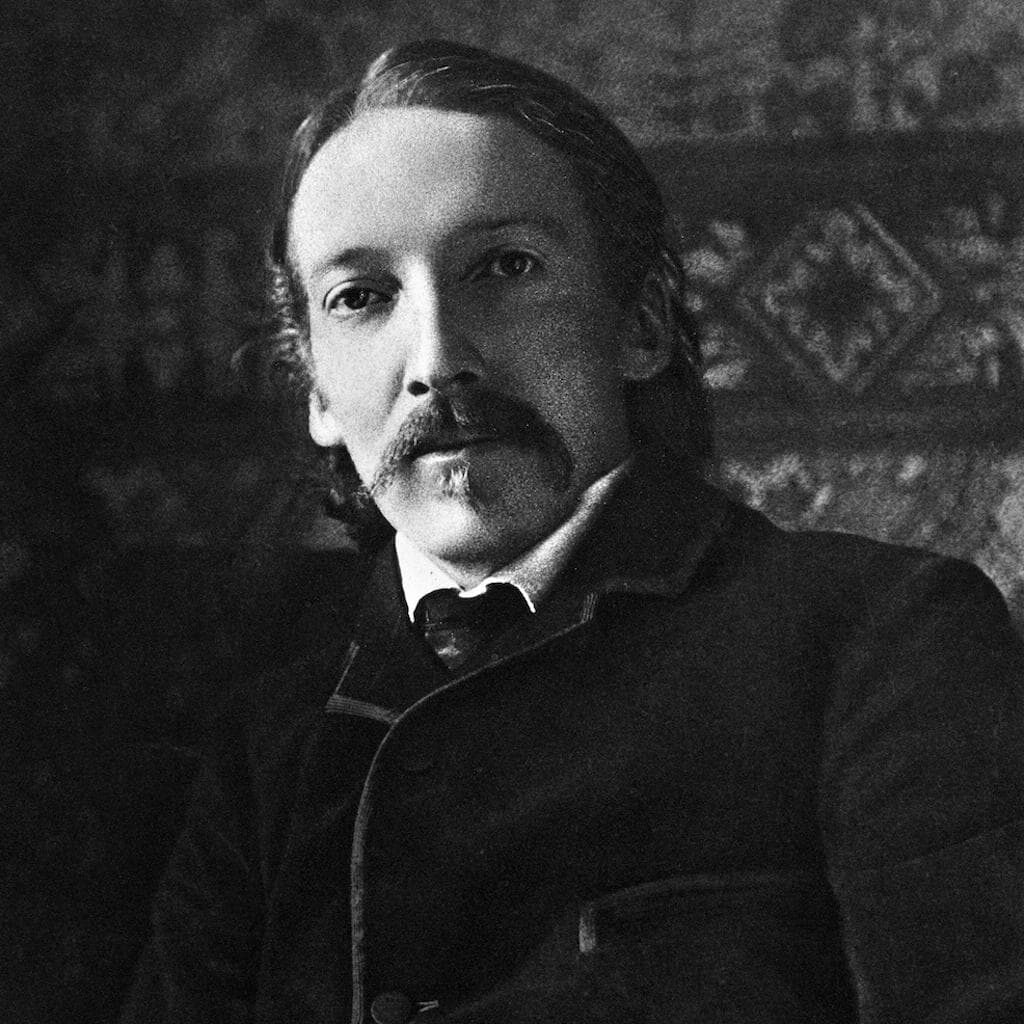