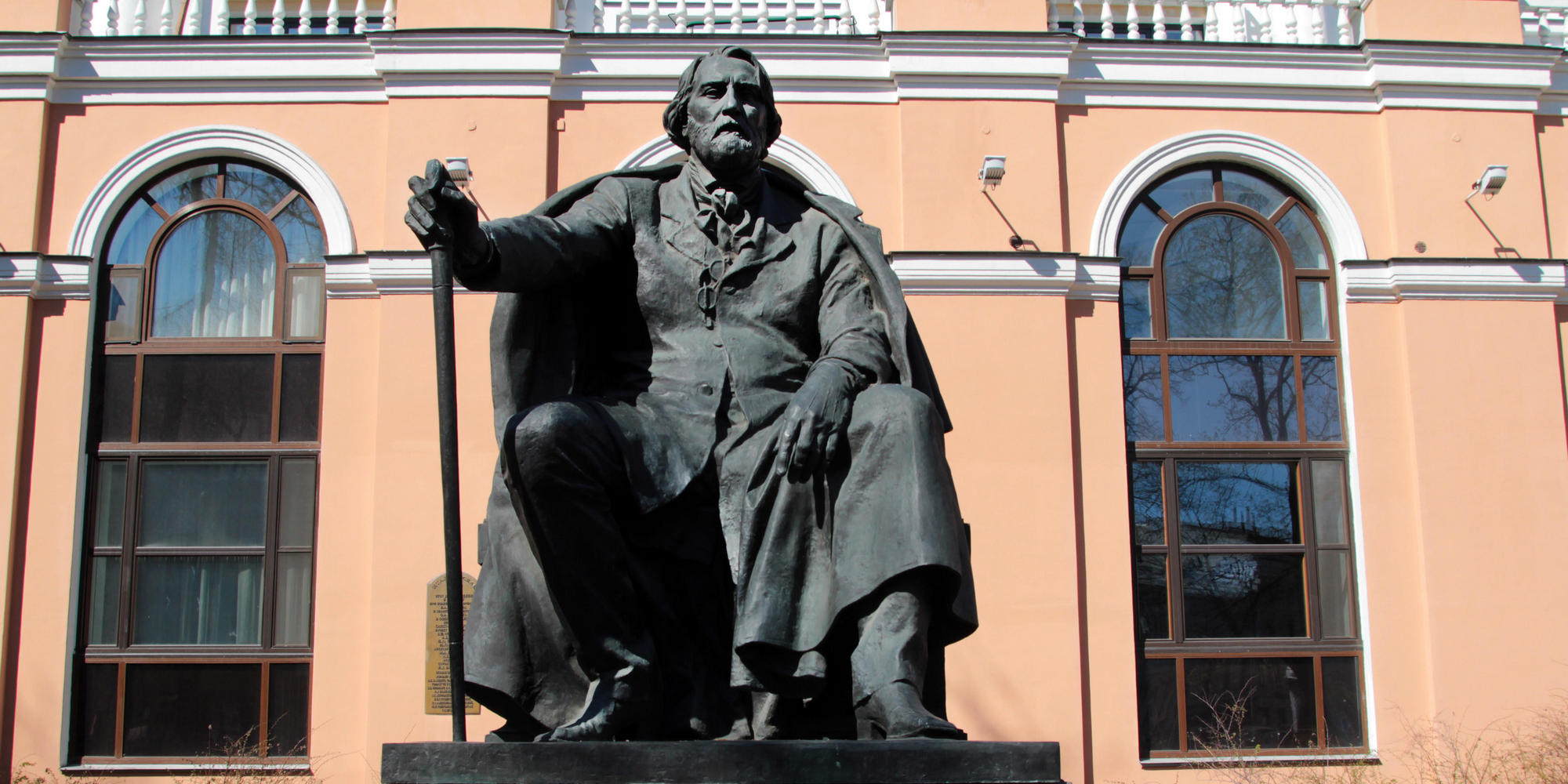 David Stuart Davies looks at the major work by one of the greatest Russian authors.

‘We sit in the mud, my friend, and reach for the stars.’

Ivan Sergeyevich Turgenev (1818-1883) was a novelist poet and playwright, and one of the greatest figures of Russian literature. His novel Fathers and Sons (1862) is regarded as a masterpiece and the first modern novel in Russian. It was also highly respected in the Western world, gaining approval from such literary giants as Gustave Flaubert, Guy de Maupassant and Henry James.

Fathers and Sons is set during the six-year period of social ferment, from Russia’s defeat in the Crimean War to the Emancipation of the Serfs. Turgenev wrote the novel as a response to the increasing divide between two generations of Russians. He observed a growing cultural schism between the ‘fathers’, the liberal faction, and the ‘sons’, the nihilists who rejected the old order. Both groups sought to bring about social change in the country but from different perspectives. The author explores tensions both between generations, as the title suggests, and between social classes. The central character is the radical thinking Bazarov who is a nilhilist, a term coined by Turgenev to identify those whose rebellious beliefs denied the validity of all laws except those of natural sciences.  Bararov’s stance is epitomised by his statement ‘I don’t see why it’s impossible to express everything that that’s on one’s mind.’ His views reflected the attitude of scepticism and iconoclasm that had grown in the consciousness of Russian youth in the 1860s.

As Turgenev explains: ‘A nihilist is a man who does not bow down to any authority, who does not take any principle on faith, whatever reverence that principle maybe enshrined in.’

These views are shared by Bazarov and his student friend Arkady Kirsanov. Their brash opinions bring them into conflict with members of the older generation. In particular Kirsanov’s father, the gentle romantic Nikolay Petrovich and his brother, the courtly old-worldly Pavel Petrovich. Bazarov’s intellectual arrogance causes havoc. The friction becomes heated and tempers flare, resulting in a duel between Bazarov and Petrovich. This scene is very skilfully handled for not only is it suspenseful but is also superbly comic in its effect.

Although Turgenev presents his hero with a kindly objectivity, he does not gloss over the undeniably offensive aspects of his character such as his cruel treatment of servants. However, as was more or less inevitable, the younger generation considered the book as a an attack upon them. In fact, when it was first published Fathers and Sons enraged both the old and the young, reactionaries, romantics and radicals alike. It was only in later years that the book received great acclaim.

As with all novels that deal in truth and realistic human relationships, there is at the core of the narrative an intelligence that goes beyond the period and nature of the society in which it was set. In Fathers and Sons Turgenev gives a timeless depiction of generational conflict during social upheaval. It vividly portrays the clash between the older Russian aristocracy and youthful radicalism that foreshadowed the revolution to come and offers modern day readers much to reflect upon as they look around their own tumultuous, ever changing world. The attitudes of youthful arrogance and passion conflicting with the staid intransigence of age is always with us.

What enraged Turgenev’s critics at the time was that he pandered to neither progressives nor conservatives. In Bararov we have a character who claims to be a man of the future who asserts that chivalry is a kind of deformity and is at one with the peasants, but in their estimation he is just a simple buffoon who does not understand their hardships.

Nevertheless, Bazarov, however cocky, however offensive at times, is a fully rounded character, compelling both our respect and our involuntary affection.

The hostile reception the novel received on publication prompted Turnegev to leave Russia. Being regarded as his country’s foremost cultural representative in the West pleased him, although his self-imposed exile cut him off from his subject matter and inspiration, thus harming him as a writer. He took up residence in Baden Baden for a while before moving to Paris. During his later years he wrote short stories and other novels but none receiving the praise and recognition awarded to Fathers and Sons. The author died in Paris in 1883 and was buried in St Petersburg, Russia. During his life he formed a friendship with Henry James who wrote this of him after he had died: ‘He was the most generous, the most tender, the most delightful of men; his large nature overflowed with love of justice: but he was also the stuff of which glories are made.’

Of all the Russian works of literature produced in the 19th century Fathers and Sons has the greatest accessibility for the modern reader. It has clarity of ideas, a straightforward narrative that is leisurely in pace and lacks the tendency to be verbose, a trait, for example, that one finds in the works of Tolstoy and Dostoevsky. Although the book is, in large measure, an intellectual novel in that it gives voice to ideas and to the clash of ideas, it also pulses with life and movement. If you are tempted to dip your toe into the world of Russian literature from this turbulent period, may I make so bold as to suggest that you begin with Ivan Turgenev’s Fathers and Sons. 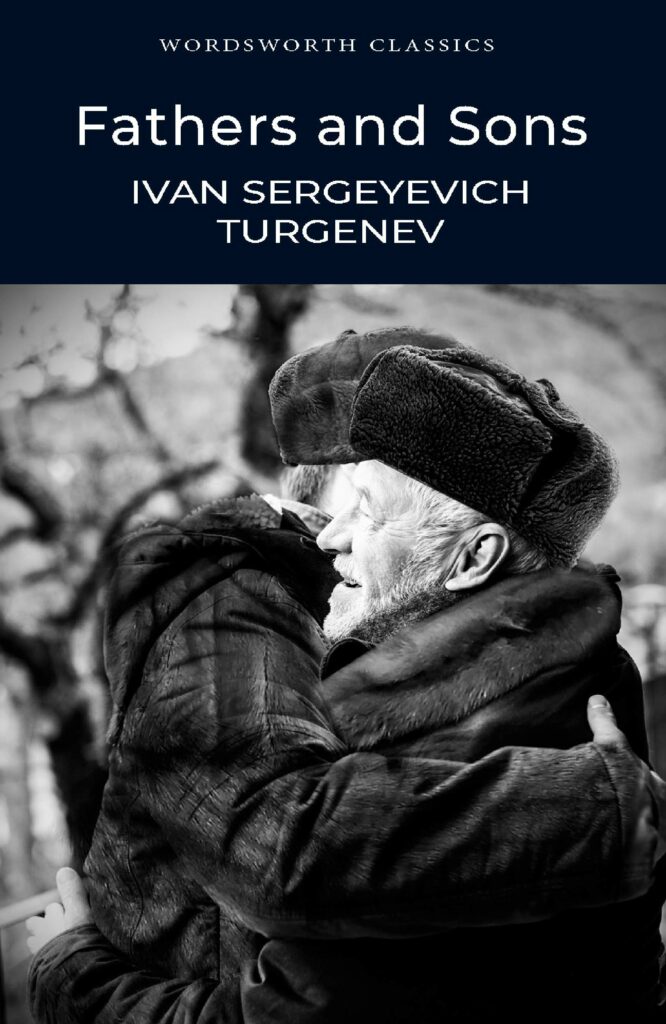 Ivan Turgenev (1818 -1883) was the first Russian author to achieve international fame, and is ranked with Tolstoy and Dostoevsky as the three great Russian novelists of the nineteenth century. 'Fathers and Sons' is his most enduring work.