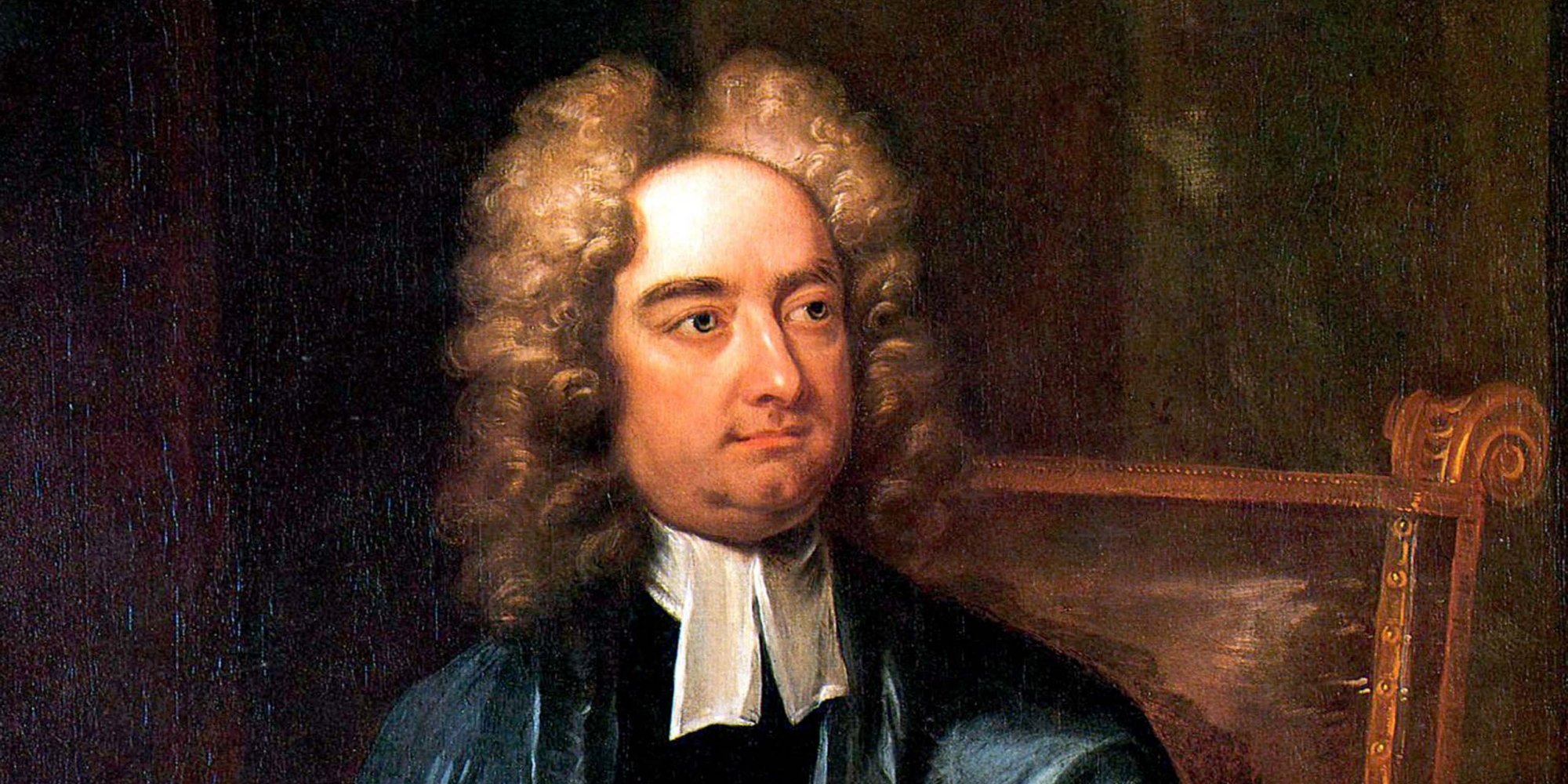 On the 350th Anniversary of his birth, David Stuart Davies looks at Jonathan Swift’s most popular novel.

Gulliver’s Travels, (1726, amended 1735), whose full title is Travels into Several Remote Nations of the World In Four Parts By Lemuel Gulliver, First a Surgeon, and then a Captain of Several Ships, was written by Irish writer and clergyman Jonathan Swift (1667 – 1745). The novel is a savage satire on human nature, which has retained its relevance through the ages. Swift claimed that he wrote the novel ‘to vex the world rather than divert it.’

Swift was a member of the Martinus Scriblerus Club, made up of such notable writers as Alexander Pope, John Arbuthnot, and John Gay. They agreed to write pieces that satirised the follies and vices of learned, scientific, and modern men. Each of the members was given a topic, and Swift’s was to satirise the numerous and popular volumes describing voyages to faraway lands popular at the time. Indeed, Gulliver’s Travels may be read as a systematic rebuttal of Robinson Crusoe (1719), Daniel Defoe’s optimistic account of human capability. Swift kept the form of the genre but expanded his target. Instead of simply parodying the literature of fictitious voyages, he also attacked what he considered were people’s most conspicuous vices. He turned foibles and inane attitudes into grotesque and ridiculous. Savagely ironic, it portrays man as foolish at best, and at worst, not much more than an ape.

Written with disarming simplicity and careful attention to detail, this classic is diverse in its appeal: for children, it remains an enchanting fantasy. For adults, it is a witty parody of political life in Swift’s time and a scathing send-up of manners and morals in 18th century England.

The novel recounts the story of Lemuel Gulliver, a practical-minded Englishman trained as a surgeon who takes to the seas when his business fails. In a first-person narrative tinged with irony, Gulliver narrates the adventures that befall him on these travels into strange and fantastic realms.

His first experience is in the land of Lilliput inhabited by small humanoid creatures. After being shipwrecked, Gulliver wakes to find himself bound by innumerable tiny threads and addressed by his minute captors who are in awe of this giant but fiercely protective of their kingdom. They are not afraid to use violence against Gulliver, though their arrows are little more than pinpricks to him. But overall, they are hospitable, risking famine in their land by feeding Gulliver, who consumes enough food to feed a thousand Lilliputians. This portion of the novel is popular as a children’s story – indeed I was given a simplified version as a Sunday school prize when I was seven years old.

Eventually, Gulliver becomes a national hero, used by the army in its war against the people of Blefuscu, whom the Lilliputians hate for doctrinal differences concerning the proper way to crack eggs. But things change when Gulliver is convicted of treason for putting out a fire in the royal palace with his urine and is condemned to be shot in the eyes and starved to death. Gulliver escapes to Blefuscu, where he is able to repair a boat he finds and set sail for England.

Gulliver’s next voyage takes him to Brobdingnag, a land of giants. Here, he is discovered by a farmer who sells him as a novelty animal to the Queen who is entertained by his musical talents. However, Gulliver is often repulsed by the physicality of the Brobdingnagians, whose ordinary flaws are magnified by their huge size. For example, when a couple of courtly ladies let him play on their naked bodies, he is not attracted to them but rather disgusted by their enormous skin pores. Even Brobdingnagian insects leave slimy trails on his food that make eating difficult. Gulliver is able to escape Brobdingnag when his cage is plucked up by an eagle and dropped into the sea.

Not daunted by his previous adventures Gulliver sets sail yet again and, after an attack by pirates, ends up in Laputa, where a floating island inhabited by theoreticians and academics oppresses the land beneath it, called Balnibarbi. The scientific research undertaken in Laputa and Balnibarbi seems totally inane and impractical, and its residents too appear wholly out of touch with reality. Taking a short side trip to Glubbdubdrib, Gulliver is able to witness the conjuring up of figures from history, such as Julius Caesar and other military leaders, whom he finds much less impressive than in books. After visiting the Luggnaggians and the Struldbrugs, the latter being senile immortals who prove that age does not bring wisdom, he is able to sail to Japan and from there back to England.

Finally, on his fourth journey, he arrives in a land populated by Houyhnhnms, rational-thinking horses who are the rulers, and by Yahoos, brutish humanlike creatures who serve the Houyhnhnms. He is treated with great courtesy and kindness by the horses and is enlightened by his many conversations with them and by his exposure to their noble culture. He wants to stay with the Houyhnhnms, but his physical features are too much like those of a Yahoo and so they eventually reject him. Grief-stricken, he agrees to leave. On his return home, he now views all humans as being like the Yahoos. He becomes a recluse, spending most of his time in the stable talking to the horses.

Most dramatised versions of the story – and there have been many – concentrate on the comic characters and situations that occur in the novel and avoid the satirical implications completely. Often the voyage to Lilliput is the main focus of the production, neglecting the other sections. Of the notable adaptations, mention must be made of Max Fleischer’s early animated feature-length classic, which appeared in 1939. It was aimed at children and was very much in the Walt Disney mould. In 1960 there were The Three Worlds of Gulliver which used actors and stop motion photography with Kerwin Matthews as the intrepid voyager. Again it was designed for a youth audience. In 2010 there was a version starring Jack Black in the title role. While the screenplay mainly concentrated on Gulliver’s experiences in Lilliput, the story was set in the modern day. The movie was essentially a fantasy adventure comedy film which one reviewer stated ‘fails to do any justice to its source material, relying instead on juvenile humour and special effects.’

The scope and adult ferocity of Swift’s satirical deconstructions of human behaviour is not really suited to drama. The novel is an amusing, scathing and perceptive intellectual treat which is best savoured by being read. 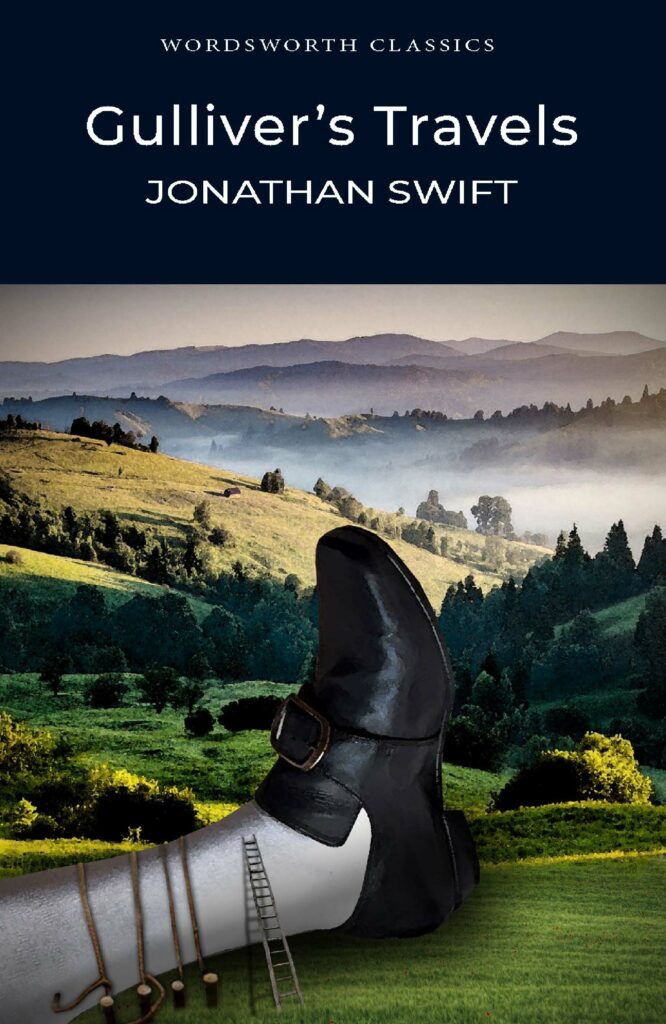 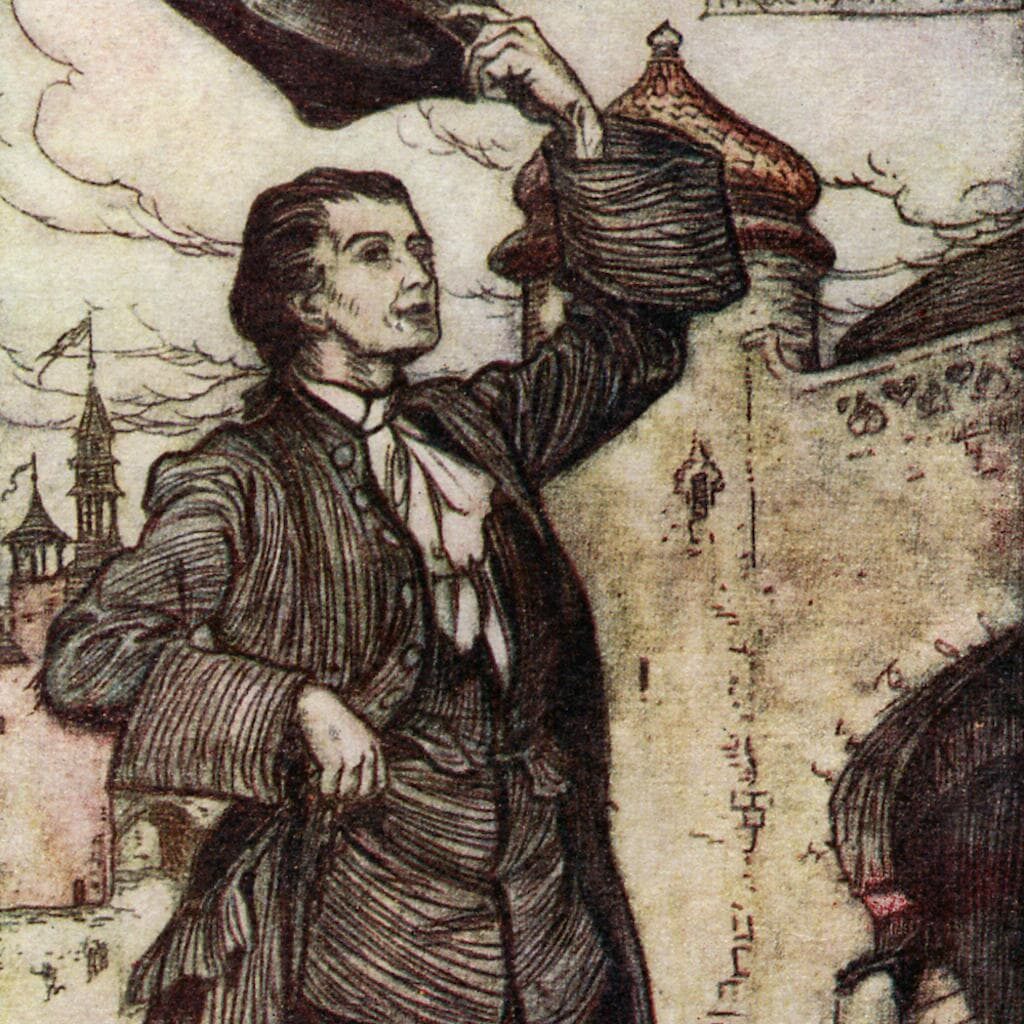 Jonathan Swift (1667 - 1745) was born and educated in Ireland, but moved to England in his early twenties, and became an ordained priest. In 'Gulliver's Travels', he created a book that has been one of the most consistently popular books written in the eighteenth century, and probably the finest prose satire in the English language.